Moving in Faith: Madison Shares Her Experience as a Transfer Student During a Global Pandemic 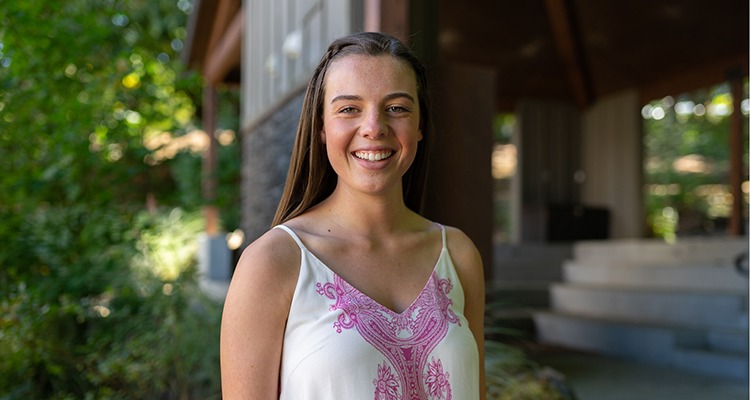 “I really wanted to be at Corban, so why are you putting me somewhere else?” This was the question Madison Nieuwendorp asked God on an hour-long drive back from Corban’s campus. In the previous summer, she had heard about Corban University through her time at Trout Creek Bible Camp, where several Corban students worked on staff. Their experiences were enough to convince her to visit.

“I loved it,” she says. “I loved the campus. I loved being there—every single aspect of it. I felt like Jesus was calling me here.” On the ride home, her mom agreed with her. This was the place where she belonged. But as the journey stretched further from the quiet campus nestled in the pines, closer to home and the extraneous circumstances which awaited her there, Madison began to realize Corban might not be part of God’s initial plan.

“I kind of had to wrestle with Jesus about that,” she says. As summer came to an end, instead of heading to Corban, she found herself at nearby Concordia University, eager to begin her degree in elementary education, and hoping God would bless her where she was.

Her faculty there were excellent, but she still felt as though something was missing. “I wanted to figure out, as a teacher, how I could portray Jesus in a place where I’m not supposed to talk about Him,” she says. “That was just not something that was talked about, and that was really frustrating.”

As she began her sophomore year, her frustration only increased. “My mom just randomly asked me one day, ‘Why don’t you just apply to Corban again and see what happens?’” Madison was afraid to get her hopes up again, but she applied, mainly with the goal of appeasing her mother. With her application now pending and far from her mind, she began to feel God calling her to take a step of faith and shift her focus to taking gen ed courses, even though the decision would set her back a full academic year at Concordia. Madison remembers praying, “Jesus, I really hope You know what You’re doing right now, because this is scary.”

Her answers did not come, and her frustrations continued. She watched as her friend group deteriorated, pushing forward in the degree-focused classes which she had left behind. God’s plan for her had still yet to materialize. But then the news broke. Concordia would be closing its doors indefinitely. “Right then I knew that was why God had me apply in the fall,” she says. “He was looking out for me.” Her years of confusion and frustration began to dissolve in successive waves of God’s providence.

The gen ed courses she was finishing would allow for an on-schedule transition into Corban’s education program, her financial aid package was far more than she expected, and Concordia’s transition to an online model to conclude the year allowed her to work two jobs in order to further cover the costs of her education. “I felt like God had laid the foundation for me to feel more prepared to transfer in,” she says.

While Madison, a junior, feels comfortable with her adjustment to Corban’s academics, she is ready to admit the difficulty of plugging into a new social environment as a transfer student. “Once you start getting into your junior and senior year, you kind of have your friend group filed down,” she says. “But Corban has done a wonderful job of being welcoming and seeing transfer students and meeting us where we’re at.”

This year, more than any other, has proven challenging for transfer students. The added restrictions of navigating campus life during a pandemic make joining a new community even more difficult. “You can’t be in a large group. You can’t take your mask off. There are certain things that you just can’t do,” Madison says. “I think that makes it really hard to form relationships.”

Corban has been proactive in trying to find ways to aid transfer students through this unique year. For example, Madison’s roommate is a former transfer student herself and has been able to help her through the process. The place where Madison has found relief is in her education classes, where Corban’s close academic community takes center stage. From the first day of classes, she quickly rediscovered the heart of the campus she fell in love with on her visit years ago. “In my ed classes, everyone came to me and asked me my name and was very intentional about getting to know me,” she says.

It is in her education classes that Madison has felt most at home, not only socially, but academically and spiritually as well. “Since the first day, right from go, there’s been conversation about how to show Jesus in the classroom,” she says. And it’s not only in her education classes that she finally is feeling the biblical integration that she had always longed for. “In every class that I’ve had, we’ve prayed before it,” she says. “In one class I even wrote down a Bible verse as a reference in my notes, and I couldn’t believe it. This was not even a Bible class. It’s been a massive encouragement to me.”

As an elementary education major with a heart for “weird and quirky” fifth graders, Madison is hoping to make a difference in the communities like the one she came from. Madison grew up in a Title One school (a classification for schools with the highest proportion of students from low socio-economic backgrounds) and recalls the difficulties she witnessed there. “Most of the students there didn’t have someone who genuinely cared for them,” she says. “It’s rough and rugged, and that’s not their fault.”

In her future career, she hopes to return to a similar community, acknowledging these schools as the places where the need is most critical. “I just want them to know that they’re loved and cared for no mater what,” she says. “I think that’s a big part of the gospel. Knowing that Jesus loves us is the whole point.”

Though the road that led her to Corban was not as direct as she may have initially hoped, Madison sees God’s fingerprints all over her journey. She now finds herself firmly planted in the community she had hoped for as a high school senior and in an academic environment which is empowering her to one day be the gospel to her future students.

Her advice for students like her? “Trust God’s leading, pray fervently, and take steps of faith,” she says. “I think that when God calls us to obedience, if we follow Him, He is faithful to bless us. It’s not always the blessing we thought it was going to be—I didn’t think God was going to bless me with an education at Corban—but He has a plan, and He was always there to catch me.”

Corban welcomes transfer students, and we will work with each student to ensure as many credits transfer in as possible. Start your application today.