A Mind for Business and a Heart for Service: Bryce Petersen named “Young Alumni of the Year” 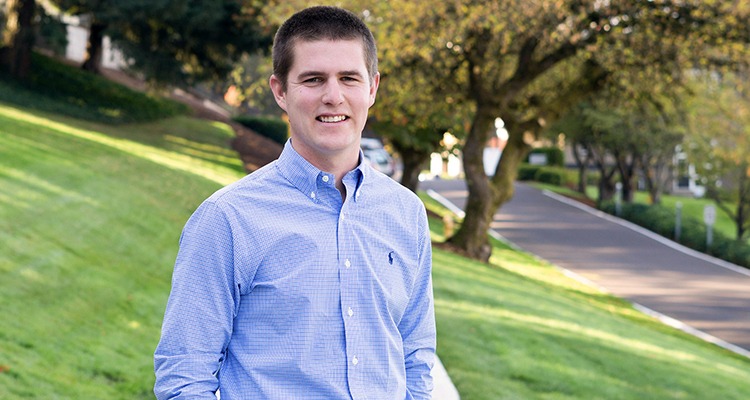 Bryce Petersen was selected as Corban’s Young Alumnus of the Year for 2018-19. This award is presented to someone who graduated from Corban within the last ten years, and who exemplifies Christian character and a life in service to Christ and others. Jean Wheat-Palm, Real Estate Broker for John L. Scott Real Estate, says, “Bryce Petersen is an honorable young man of integrity who is a leader with defined principles, values, and ethics. He . . . has moral conviction, a sense of strategic vision for the objective, and knows how to achieve goals and inspire people along the way.” Read on to learn Bryce’s story.

“This doesn’t feel like what I was made for.”

Bryce Petersen was sitting in class his sophomore year of college, reading children’s books. He’d come from a family of educators—his father was a teacher and principal, and his mother was a librarian at a school—so he had decided to follow in their footsteps and study elementary education at Corban. But sitting in class and trying to read a children’s book with enthusiasm and charisma, Bryce kept thinking, “I don’t feel like I’m the right guy for this.”

The thought percolated in the back of his mind for about a month. If elementary education wasn’t his path, then what was?

The answer came to him on November 1, 2011, when his grandfather passed away.

Although he’d never pictured himself owning a car-related business, Bryce had always loved cars. He remembers his dad giving him $400 to buy his first car in high school. “I bought a Volkswagen Jetta—the car would die after a minute of running if you weren’t driving, so it was only good for country roads.” Seeing all of the new BMWs and WRXs in his high school parking lot, Bryce made a goal to flip his Volkswagen Jetta for something better, flip that car for something better, on and on until he’d flipped his way up to a Subaru WRX. And he did. 25 cars later, he finally owned a Subaru WRX his junior year of college. Perhaps he’d had a mind for business all along.

After his surprise at becoming a business owner had waned, Bryce began to take a look at exactly what he had inherited. Not only did he have a lot to learn, but the company needed some help. Bryce rushed up to the business professors at Corban and began asking questions.

With the help of Bryce Bernard and Shawn Hussey, Bryce slowly began to get a handle on his new company. “Hussey helped me build a company website, and Bernard helped me refile the business,” he remembers. “They were literally spending after-hours and weekend time with me, and I wasn’t even a business student. I was an elementary ed major!”

The longer Bryce worked on his grandfather’s business, the more it felt like what he was made for. “It was exciting how many variables were involved, and what it took to run a successful, ethical business. It was practical and tangible. It excited me!” So Bryce changed his major from elementary education to business.

It seemed, at first, that Bryce’s season of frustration and lack of direction was over. He thrived in his business classes, and his team even earned first place for their senior business project. Bryce and his team had worked with Kabum Coffee, a company that provides responsibly-sourced coffee from Africa. They were tasked with conducting a survey of the West Coast to discover if churches would be inclined to purchase socially responsible coffee, even if it was a bit more expensive. (“We discovered conclusively that churches cared more about being fiscally responsible when it came to their coffee,” Bryce notes.) After his team’s final presentation, which was attended by business leaders from the Salem area, Bryce remembers being handed several business cards—community leaders who’d heard him present and were interested in hiring him.

Feeling perhaps a little too confident, Bryce began interviewing with the companies that had expressed interest. One by one, without fail, they rejected him. “It kind of threw me on my heels,” Bryce says. “Maybe I’m not as ready as I thought I was.”

Six months after graduation, Bryce still hadn’t found a job, despite being told over and over about jobs where he’d supposedly be a great fit. While the whole world seemed to be telling Bryce what a promising job candidate he was, God seemed to remain silent.

“One day I was driving home, super frustrated because I had just gotten rejected from another job that someone had told me I was a shoe-in for.” Although Bryce wasn’t someone who experienced signs or words from God very often, that day on his drive home, he felt like God gave him a name, “clear as day.” Travis.

Bryce had known Travis in the past, but hadn’t talked to him for years. His phone rang. It was his dad, asking if he could flip burgers at an elementary school barbecue that night. When Bryce showed up to help, he did a double-take: Travis was the other person working the grill.

They got to talking, and Bryce shared his struggle to find a job. “Seriously?” Travis said. “I’ll put out a Facebook post and share some of your skill sets and interests.”

First, he came back to Bryce with an opening at a bank that was looking for a manager for their Wilsonville branch. But once again, what looked like a sure path forward ended abruptly. Bryce was offered the job—right before corporate announced that the branch in Wilsonville would be closing. He shared the bad news with Travis, who brought him another opening, this time with a credit union in Salem.

For what felt like the hundredth time, Bryce walked into an interview.

“Have you ever done a national consumer survey?”

Bryce handed them his portfolio from his senior business project with Kabum Coffee.

He showed them the website he’d rebuilt with Shawn Hussey for his grandfather’s business.

“Have you ever done a marketing project focused on consumer insights?” As a matter of fact, he’d done one in Kelli Gassman’s class at Corban. He handed over the portfolio.

“God’s hand was on it, there’s no way around it,” Bryce says. “The only things I was prepared for in that interview were the things they asked.” As he was being shown out of the building, his interviewee pointed to a space and said, “And that’s going to be your office.”

Bryce worked at Valley Credit Union for two years, where he further developed his administration and management skills. Because the credit union primarily serves employees of Salem Health, Bryce began building relationships with the hospital. When a position opened up for a community relations liaison there, he applied and was hired.

After a series of setbacks, Bryce had finally begun to encounter a series of open doors, as God clearly directed him from one opportunity to the next. He thrived in his new role at Salem Health, where he was responsible for helping the hospital increase its involvement in the community. “I had the opportunity to lead a couple-year initiative on improving the hospital’s footprint, from corporate giving to staff involvement in the community,” Bryce says.

Through his role helping Salem Health forge community partnerships, Bryce has found ways to partner with community organizations himself. A few months ago, he began to look for a place to serve on a local nonprofit board. “I was praying, and I really felt like God was nudging me to the Union Gospel Mission.” He turned and picked up his phone, about to call Dan Clem, the CEO. Instead, he put the phone back down. “You know what, I need to pace myself.” Perhaps the inclination to wait had come from God, because later that afternoon, Bryce found himself at a luncheon with none other than Dan Clem. Before he could initiate a conversation, Dan walked up to him and said, “Bryce, I really want someone from the hospital on our board. Do you know of anyone good?”

Time after time, Bryce has learned how easily things can fall into place for the person who waits and listens to God’s voice. From becoming a business major to getting hired at his first job out of college to taking on his current roles at Salem Health and in the community, Bryce has learned how patience and a sensitivity to God’s voice will faithfully lead him into places where he can say with confidence, “This is what I was made for.”

Bryce and his wife Chelsea (’16), who teaches at Judson Middle School, currently live in Turner with their golden-doodle, Winston. “I thank God I married an extrovert,” Bryce laughs, explaining that Chelsea’s love for engaging with people has been an incredible blessing as they find themselves at community events, dinners, and service projects most evenings. “I can really see God knowing who the right person was. We both feel called to be involved in our local communities and try to contribute with what we have.” Bryce still owns Petersen Auto Appraisals, and he has retained his love for cars, nearing his fiftieth acquisition in his collection of automobiles.