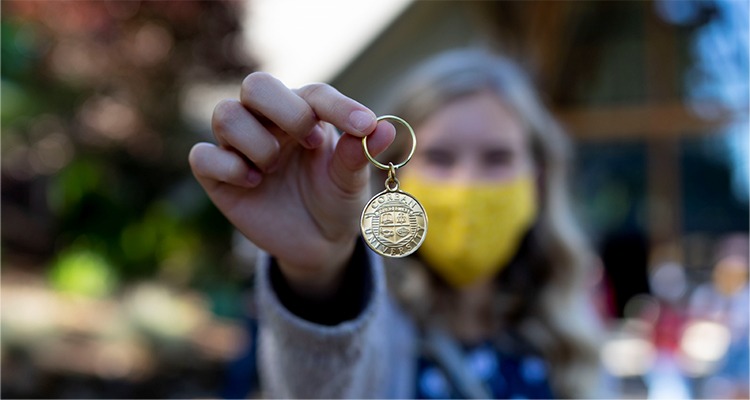 The ancient call of the shofar did not ring out across the campus. The droning skirl of bagpipes could not be heard echoing off the clock tower. Dr. Jim Hills couldn’t be seen leading a colorful procession of faculty toward the Psalm Center, ceremonial mace held high. Convocation, as the Corban community knew it, did not appear to be happening. But the uncommon silence was not defined by absence, but by the presence of something which had not occurred for more than six months. Across campus, Corban’s community was gathering together.

Convocation marks the beginning of the academic year. It is a time for students, staff, and faculty to join together in commitment to God and to one another. This year, spread across the lawns of the amphitheater, dotted across the floor of the Psalm Center, in quiet dorm rooms, and in private offices, Corban’s community came together to celebrate a new year.

The setting looked markedly different, devoid of the customary pageantry one student likened to a combination of the book of Revelations acted out in Harry Potter attire. But for the first time since the lockdown, Corban’s family, old and new, was together again.

As University President Dr. Sheldon Nord approached the lectern at the center of the Psalm Center stage, eyes watched on screens, awaiting the official start of a year that many feared would never happen. “Many of us believed that what started last spring would be done by now, and we would begin this school year like we did any other,” Nord said. “This is anything but normal. But we are reminded that the God we love and serve knew all about this Fall and he is still in control.”

The theme of God’s steadfastness even in times of struggle carried like a familiar melody throughout the event. University Provost, Dr. Tom Cornman, encouraged students and staff in his prayer to, “turn from speculation, rumor, and innuendo in order to seek those things that are true, honorable, and right,” remembering to always care for those who have no champion.

Student Body President Tobi Adeoye guided her fellow students through her own journey at Corban; from packing her bags to leave in her first week, to feeling called by the Holy Spirit to become a leader on a campus where she felt different, “isolated, and alone.” Her rising refrain, “God Knew,” carried her audience through her fear and to the purpose she discovered in the events of a tumultuous year. Adeoye, Corban’s first female Black Student Body President, recalled asking God during the summer why she was the one to inherit what she called the “pandemic presidency.” Her answer came a few weeks later. “But then the nation erupted in racial division and chaos, brought on by the death of George Floyd,” she said. “I realized, as I stared at my melanin pigment in the mirror, that God knew.”

Dean of the School of Ministry, Dr. Greg Trull, spoke further into the polarization of the current cultural climate, highlighting present struggles with authority. He reminded the audience that yielding to Christ’s authority is not only our ultimate goal and destination, but the method by which we get there, pointing to Christ’s example—the one who held all authority and yet adopted the nature of a servant—challenging students and staff alike to adopt a similar mindset, “that the person that’s in front of me is more important than I am.”

Trull’s evocation of John 13, where Jesus provides this example of humble service by washing his disciples’ feet, was made palpable as each speaker, after concluding their speech, reached for a small cloth and proceeded to wipe down and sanitize the lectern in front of them, preparing it for the next speaker.

One of the few traditional elements of Convocation that remained was perhaps also its most significant. Led by representative students, each class committed themselves to the community through a pledge, recited in unison from the many pockets of viewers scattered across campus. The series of pledges was capped off by a joint commitment of faculty and students, led by Dr. Jim Hills and Tobi Adeoye, in which they promised to fulfill Paul’s challenge in Acts 29 to “run the race with endurance.”

As President Nord assumed center stage one final time, he revealed the theme for the year, prayerfully chosen long before the pandemic and the social unrest which followed in its wake: “All Authority”—patterned after Jesus’ call in Matthew 28. Nord shared the symbolism of the mace and the shofar, symbols of calls to unity and common purpose. “These are unusually challenging times,” he said. “With a worldwide pandemic, a national and global economy that is fragile and unstable, racial injustice, rioting, property damage, and continued violence toward our friends and neighbors, political divisiveness and disunity.”

He closed by reminding the community of its call to be different, to emulate Christ’s example, to locate authority in its proper place, and to rest secure in the knowledge of God’s faithfulness. “At Corban University, we will have grace toward one another,” he said. “We will have unity that is seldom found today. We know the peace that passes all understanding because we know the Source of that peace.”

As Convocation concluded, the bagpipes did not ring out. The shofar and mace remained untouched on their pedestals. The colorful march of professors was replaced instead by the patient procession of the few senior students who had been allowed into the Psalm Center, now trickling out into the quiet air. But even beneath their masks they were smiling. They were together, six feet apart.