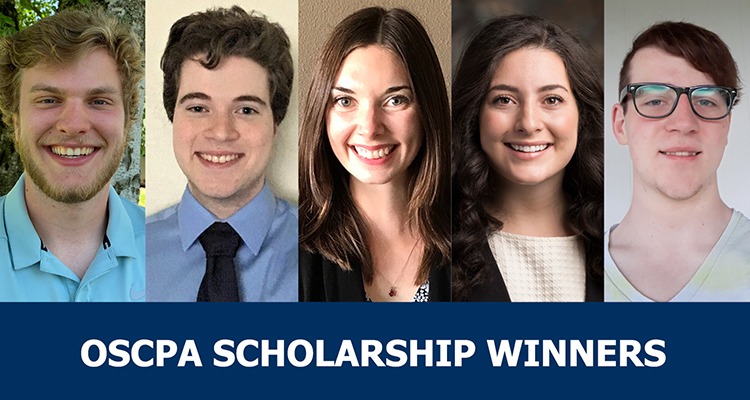 Those familiar with Corban’s accounting program often point to its stability. It boasts a professor who has been with the school for 34 years, an annual track record of near 100% employment for its graduates within their first two months after graduation, and a steady reputation in the local community for producing quality accountants. But it wasn’t always this way.

“When I first heard about the OSCPA (Oregon Society of Certified Public Accountants) scholarship program over 20 years ago, they had never heard of Corban’s accounting program,” longtime Professor of Accounting, Dr. Bryce Bernard, says. Bernard quickly went to work to make sure his students had the opportunity to be recognized.

Since the University first became recognized by the OSCPA, Dr. Bernard’s hard work has been paying dividends, as Corban accounting majors have been represented among the annual OSCPA winners nearly every year. This year, a record five Corban students were awarded scholarships.

Founded in 1985, OSCPA Educational Foundation scholarships are highly competitive, offering support in the range of $2,500 – $4,000 to students from Oregon and Southwest Washington who possess high academic standing and express the intent to pursue CPA careers in the state of Oregon. Each year, a large pool of students from some of Oregon and Washington’s top universities compete for access to the valuable funding and exposure the awards bring.

“Usually U of O, OSU, and Portland State dominate the list of winners,” Bernard says. “But we had five students this year, which is a lot. It’s the most we’ve ever had, and it speaks to the quality of our kids.”

For Corban’s five scholarship winners, Lauren Barraza, Emma-Anne Lonsford, Seth Mack, Joshua Miller, and Andrew Phelps, each will benefit from the tuition relief afforded by the scholarship, allowing them to continue their degrees at Corban, and in some cases, pursue their CPA licensing while enrolled in Corban’s MBA program.

“I was thrilled to receive a scholarship from OSCPA,” Emma-Anne Lonsford says, “both due to the financial help it represents and also because it recognizes the hard work that I’ve put in.” Fellow scholarship recipient Andrew Phelps points to his Corban education and community as a prime factor in his success. “It is rewarding to see how all the work I have done up to this point is paying off,” he says. “I never would have been able to achieve this without the support from my friends and professors at Corban.”

For each scholarship winner, it was Corban’s unique community that stood out as critical to their academic experience. “At Corban, I knew I could pursue a Christian education at a small school where I wasn’t just another student to the professors,” says scholarship recipient Seth Mack.

Lauren Barraza agrees. “I felt that the faculty were more than just professors, they were mentors for me and did all they could to help me achieve my dreams,” she says. “Not only did I receive a great education, but I learned the importance of biblical integration in my field. I carry these concepts and principles with me daily.” It’s a common sentiment among Corban students who come to know their community as far more than purely academic, and their professors as more than just lecturers and advisors.

For Lonsford, she could feel the difference from day one. “When I had my campus visit I also had the opportunity to meet with Dr. Bernard and ask him all my questions about the accounting program,” she says. “I was amazed that a new student could just chat with the head of a major because all the schools I’d visited had been much larger. It was what fully convinced me that Corban was a good fit. I was ecstatic when I received my financial aid letter from Corban and I was actually able to afford the tuition.”

Though crucial, the opportunities provided by the OSCPA scholarship are not purely financial. Valuable exposure to a community of potential employers is also a vital component of the award. “Every member of the Oregon Society of CPAs sees this list of winners,” says Dr. Bernard. “When they read it, they are going to see a lot of Corban students. They’re high-end kids. They all have some kind of work experience already. Some of these kids will have their pick of accounting firms by the time they graduate.”

Each student’s plans have become even more reachable due to the education Corban’s accounting program has provided, the relief and exposure of the OSCPA scholarship, and their own initiative and hard work.

“After attending Corban for three years, I now realize that my dream in accounting is to become a partner at a local CPA firm in Salem,” says Mack.

For Andrew Phelps, by next summer he plans to be on track to realize his own accounting dream. “I will be finishing the necessary credits to qualify for the CPA exam with the overall goal of becoming a CPA myself,” he says.

Lonsford plans to sit the CPA exams as soon as possible. “Long term, I hope to be a certified public accountant who helps individuals and businesses make wise financial decisions through tax planning and advising.”

For Dr. Bernard, it is the students—students like Lauren, Andrew, Seth, Joshua, and Emma-Anne—not the work, that drive his 34 -year commitment to the University. “I love what I do here,” he says. “The chance to work with these kids. The best part is the ongoing relationship with them when they graduate—watching former students become partners in firms and start hiring more graduates. We have partners everywhere. One of our grads was even president of the OSCPA a few years ago.”

From not even being recognized by the OSCPA, to having a record number of students receiving their scholarships and former alumni on its governing board, the present value of Corban’s accounting program just keeps appreciating each year. And Dr. Bernard has had the privilege of seeing it all, tracking its progress like the climbing line of a return on equity chart.

“We started with one or two majors,” he says. “And now we are graduating somewhere between 17-25 a year. It’s fun to see them get jobs, get hired, and I just think it speaks incredibly of Corban. But it’s not just me. The School of Business has been doing an incredible job. There are a lot of people who teach these kids. It’s not just accounting.”

Even though, like Emma-Anne, many of the University’s accounting majors point to the quality of the education they received at Corban as critical to their success, Dr. Bernard is always eager to point back to the quality of the students themselves. “It really has very little to do with us,” he says. “They wrote the essays. It’s their hard work. We just have incredible students.”