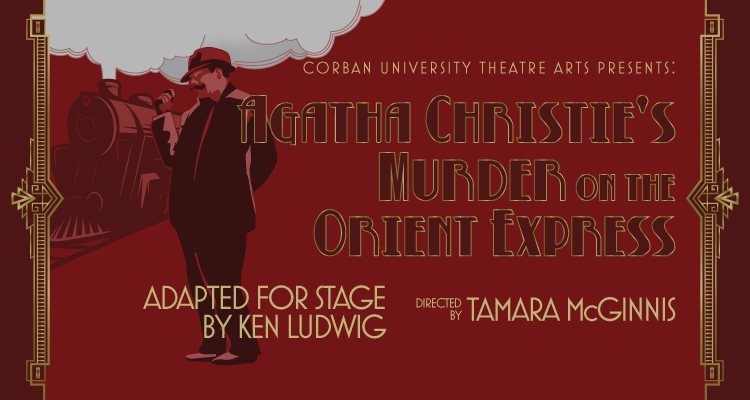 Save the date for upcoming theatre events at Corban University!

Adapted for Stage by Ken Ludwig

What do you get when you take one of the most memorable fictional detectives and put him on a luxury train that gets stranded by snowstorms? Misdirection, murder, and mystery, that’s what!

Join Corban’s theatre for Agatha Christie’s Murder on the Orient Express. Watch Poirot, the great Belgian detective, investigate his most perplexing and difficult case ever – an American tycoon murdered inside his locked train compartment. Ponder over the possible motives and opportunities of each of the passengers. Almost everyone is a suspect, but almost everyone has an alibi. Christie keeps you guessing until the unexpected and shocking conclusion. And even then, when all is revealed and the players of this drama go their separate ways, the resolution will haunt you. What was fact and what was lie? What was the right conclusion to this astonishing case? What was justice?

One of Christie’s most captivating mysteries, Murder on the Orient Express, will challenge you, will intrigue you, and will leave you thinking not just about “who done it” but about justice, love, the legal system, and human nature.

Hope to see you at the station! Hop aboard the Express! It will be an exciting ride.

Content Advisory: Recommended for ages 13 and above for violence and intense drama.

Festival seating | Wheelchair accessible | Doors open for seating half an hour before production.