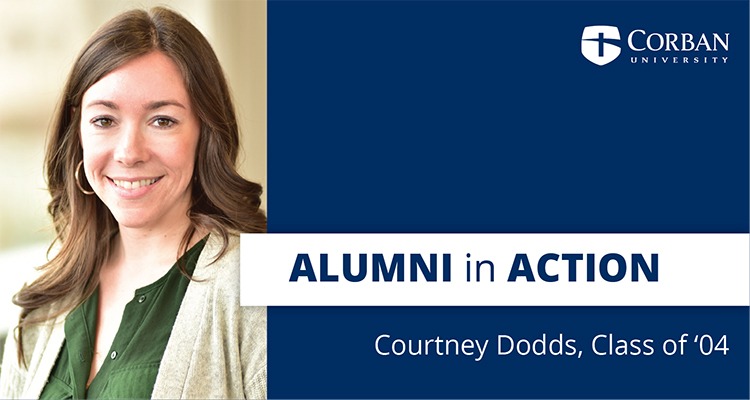 Back in March, when Oregonians were mandated to stay-at-home, most were left to wrestle with how they would carry on with life while confined to their homes. Corban alum Courtney Dodds was left wondering, “How do you stay at home when you don’t have one?”

Courtney works as the Communications Manager for Union Gospel Mission (UGM) in Portland, a Christian nonprofit organization serving a growing homeless population in the heart of the city. Courtney graduated from Corban in 2004, staying on to work as an admissions counselor before eventually pursuing life as a missionary. After spending four years on the mission field, Courtney began to look for a job in the States that would allow her to continue serving others.

At UGM she found that her missions background could combine directly with her passion for social services as she would help to provide critical care for people in need while keeping her focus on sharing the Gospel. “Both are vitally important,” she says, “but ultimately what is going to transform someone’s life is a relationship with Christ.”

UGM is positioned uniquely in the Portland community—a community often known for its areligious cultural climate compared to the rest of the state. The organization has served the city for nearly 100 years, holding to its core evangelical beliefs while still garnering the respect and support of the city.

“I think because we lead with a lot of compassion and have a history of being a place where someone can come and find help no matter what, we enjoy a lot of favor from our neighbors, the city, and other organizations—faith-based or not,” says Dodds. “Our doors are open to anyone. We’re very open about the fact that we do what we do because we love Jesus, but there are no stipulations for guests to get the help they need.”

With the advent of COVID-19, the city began to lean on UGM even more, regardless of differences in philosophy and belief. Confronted with a carousel of health guidelines and consistent closure of many other relief agencies, Courtney and her colleagues found themselves in increasingly challenging circumstances. They had to find new ways to provide essential care to those experiencing homelessness while also navigating the complexities of compliance with health regulations and government mandates.

“It was a big challenge to figure out,” Courtney says. “How do we still provide meals, shelter, clothing, and all of our others services, but also do it in a safe way?” It was a question complicated by the distinct circumstances that surround homelessness even in a pandemic-free society. Concerns over the potential for spread of the virus through the homeless community collided with an even more urgent need to make sure this growing population received the vital care they needed.

“For a few months, we actually weren’t able to take in any new residents because we were concerned about the potential for an introduced virus to spread quickly,” says Dodds. This, coupled with the shut-down of other shelters and spaces where individuals experiencing homelessness could either get help, receive essential care, or get out of the elements, led to increasingly dire circumstances for a population already at risk.

“We had to quickly pivot to figure out how to keep our commitment to doing our work safely,” Courtney says. UGM shifted its meal service to a to-go model, eliminating the potential risk of spread in their dining halls while still allowing them to meet the needs of their community. Serving ready-made meals outside, lines became socially distanced, and hand-washing and hygiene stations were set up to help reduce the risk of contagion.

They set up a system of quarantining new candidates for their addiction recovery program, allowing people in desperate need of help to enter their doors and receive safe shelter, potentially life-changing services, and the knowledge of the Gospel, as they integrate into a stable recovery community.

But even with these increased efforts on the part of UGM and the city of Portland, the impact of COVID has been profoundly felt downtown.  “A lot more tent communities have popped up,” Dodds says. “There’s definitely been a change in atmosphere. Homelessness has become even more visible. People have set up home a little bit more permanently than they’ve been able to in the past.”

The increasing visibility of homelessness was only exacerbated by the economic impact of the state-wide lockdown. “A lot more people are on the edge,” Dodds says. “So, we started providing more assistance to people that were still housed, but on the edge of homelessness, providing food and helping with rent or utility assistance.”

The disruption to normal operations did not end. Only a few months after the lockdown began, Courtney faced new challenges in her work with UGM as guests and staff alike found themselves embroiled in the complex cultural climate which erupted in the wake of George Floyd’s death.

“The social unrest does affect us at the mission,” Dodds says. “Protests march right by our building and are in our neighborhood. Early on, our building got tagged a few times and we had a couple of broken windows, but thankfully the residents that live in our addiction recovery program have been protected and there haven’t been any safety issues.”

For people experiencing homelessness who do not find shelter, many have become increasingly displaced and swept up in the city’s turmoil, forced out of the places they sleep each night by rioting and tear gas, increasingly threatened by the protests and conflicts which have also begun to occupy the heart of downtown Portland.

“I think a lot of us are sad about the results of some of the uncertainty Portland is experiencing,” says Dodds, “but we also are working to make sure that we’re responding in a God-honoring way—thinking about what Christ would have us do in this situation, and what’s the best way that we can speak to the polarization in our community. Our allegiance is to Christ and His kingdom.”

Rather than choosing to focus on the new negatives of life in Portland, Courtney has adopted a mindset of personal growth. “When you don’t know when something is going to end, when there’s so much uncertainty, I realized some areas where I have room to grow,” she says.  “I think personally a lesson I’ve learned is patience and endurance.”

In the face of overwhelming uncertainty, and the struggles of increased isolation, Courtney instead chooses to remember this is only a small, sheltered window into what it is like to experience homelessness each day. For those who live life without a constant place to shelter, many stuck and stranded on Portland’s embattled streets, uncertainty and isolation are often the norm, pandemic or not, and it is often their effects which become prime contributors to cyclical homelessness.

For Courtney, witnessing the resilience of the people she serves is what grounds her perspective. “The coolest thing is that we really do get to watch people have a life transformation,” she says. “Even with all of this craziness going on, the residents in our long-term recovery communities have continued to work hard and thrive. To see them come in, do the hard work, meet Jesus, and really honestly have a transformation experience, to see them go out and get a job, get housed, restore relationships with their family, and get involved with a faith community, is really rewarding.”

Motivated by those she serves, her challenges instead become opportunities. “I’m learning to give up some freedom or control over how I want things to be, and instead think of others more, and how I can grow in my relationship with God,” she says.

As more people come to UGM affected by the myriad of trials of this new economic and cultural climate, Dodds reminds us that it is not just Portland that is struggling. People in every community are looking for hope. “We’ve been asking people to pray for us and the city,” she says. “But I always encourage people to find organizations that are doing the work and doing it well near them and find a way to help out. Whatever city or area you’re in, ministries like rescue missions can provide tangibly for a lot of what’s going on right now with the economy and job losses.”

Though volunteering directly with relief organizations has been made increasingly difficult by the virus, Dodds still encourages people to find ways to get involved. “It’s so easy to get caught up in what’s happening online or to get angry at the ‘other side,’ and I think it’s good to have actual conversations with people in real life,” she says. “You find much more balance and compassion than if you’re just trying to interact online or reading the news all day.”

In Portland, the faith community has stepped up in support of UGM and those experiencing homelessness. “People have been so generous,” she says. “We don’t receive any government funding, so to see people step up and, in a crisis, be generous, that’s been such a blessing.”

Every day Courtney fields questions from friends, family, and community members about the state of downtown Portland. She sees each trial through a very different set of eyes. “I see a lot of good things happening,” she says. “It’s not always the loudest voice, or what makes the news, but in my involvement with my local church and working at a faith-based organization, I think that God is using this. I’m thankful that even with all of the craziness around us, people are still meeting Jesus and have an opportunity to find hope. It is happening.”