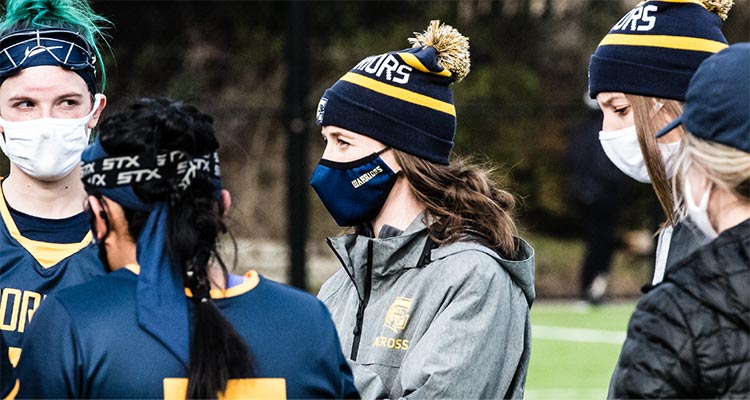 “Lacrosse can take any type of athlete and make them a great lacrosse player,” says Kylie McMinn, head coach of Corban’s first-ever women’s lacrosse team. “It’s anyone’s game and it’s everyone’s game. If you want to be good, you can be if you put the time and the work in.”

Kylie is no stranger to putting in time and work to build something great. Lacrosse has been with her since she was old enough to hold a stick, and for her whole life, she watched as her father started up lacrosse program after lacrosse program, moving across the country in search of new challenges and opportunities, growing the sport by building teams from the ground up and transforming them into champions.

Kylie eventually chose to follow her father to California where he was starting up yet another lacrosse program at a Division II school, Concordia University-Irvine. “We went 2-8 the first year because start-up teams are hard,” McMinn remembers, “but then the second year we went 14-2 and won the championship.” Her journey would eventually lead her to play in North Carolina at Montreat College, playing in yet another program’s inaugural season and joining their coaching staff following her playing career.

When the opportunity to start up a new program at Corban University came her way, McMinn stepped into a challenge she knew so well—it was in her blood. But it was not always her plan to follow in her father’s footsteps. “The only reason why I am a coach is because God had that in His will for me,” she says. After dedicating her life to Christ shortly after high school, originally McMinn’s goal was to enter the mission field. “But every desire of my heart that I had to be a missionary farmer—the discipleship, the spreading and cultivation of the gospel—is fulfilled in coaching.”

Now in her first year as the coach of Corban’s inaugural women’s lacrosse team, McMinn is focused on building her team with that same missional mindset. “I’ve found that honoring Christ in the building of this team and in everything we do has been such a blessing,” she says. “We’ve ended up with awesome girls who love God and are committed to working hard and committed to the process.”

The process has not been without its difficulties, however. Not only is the sport’s popularity relatively new in the state and region, making it difficult to find and develop a pipeline of local recruits, but Corban is one of two universities with lacrosse programs in the Cascade Collegiate Conference. As they blaze the trail for NAIA collegiate lacrosse in Oregon, McMinn and her staff are confronting a litany of logistical challenges such as finding refs for games, scheduling opponents, and nominating players for NAIA awards.

Despite these challenges, McMinn and her team have moved steadily forward, and Corban’s athletic department has been equally committed to the process. “It really helps when the athletic department supports you,” McMinn says. “We were given a full year to recruit first, which was very helpful, and I think it’s reflected in our numbers. We have 16 girls and the only other program in our conference has 9.”

But even with a mindset dedicated to embracing the challenges of growing a program, perhaps the greatest obstacle to the team’s success is a lack of adequate facilities on campus. “Facilities are definitely our biggest challenge,” McMinn says. “Our grass field, the playable part, is 90 feet too short for competition, and going off campus for practice really puts a strain on time for our program and our student athletes.” The lady Warriors currently practice offsite at Capital Futbol Club, sharing a limited time slot from 2-5PM with women’s soccer. As a result, the team is typically only able to utilize half of the field, preventing scrimmages and live-play situations, which are vital for team development.

With the possibility of home games unavailable, and lacking time for full scrimmages, McMinn’s team entered the University’s first-ever lacrosse match before even completing a pre-season scrimmage or exhibition match. “Our first game we lost 3-19, but we genuinely left that game feeling like we won because we played so well together,” McMinn recalls. “Our first competition of any kind was a game against a higher-ranked team from the Division III conference around us. We used that experience and kept finding things to work on.”

Just two games later, her team secured the first win in program history, a 14-12 victory against Pacific University, followed by a three-game winning streak. Win or lose, the growth that McMinn has seen in her team is exactly what drew her back to the sport she grew up with. “I’ve seen our girls grow in confidence as they grow in their skills,” she says. “They’re learning to address conflict with each other, welcoming it when it happens, stepping into it, working through it, and using it to bring us closer together. And most importantly, we are seeing their confidence grow in the Lord. As trying things have happened, we’ve been able to point each other to Christ.”

As she envisions the growth of her program, McMinn looks hopefully toward a new athletic complex capable of fulfilling the needs of her student-athletes as well as increasing Corban’s impact on the local community. “I think having dedicated space and facilities on campus would add more of a sense of ownership and more connectivity to the school and what we’re doing here,” she says. “It would help build more pride in the program because we would be getting better faster because we’d have our own space to practice whenever we could.”

McMinn views a new athletic complex as crucial to the growth of the sport in the region, not only strengthening Corban’s recruiting pipeline, but its community impact as well. “I’m really eager to start to dip into what’s going on in Salem and help impact the community—inviting the community and local schools in for clinics and helping develop opportunities and leagues for younger kids. But we can’t do that without our own space,” she says. “When people see that we are investing in our programs enough to have a space on campus, it makes a huge difference.”

Making a difference is core to McMinn’s program. The growth and development, not only of a program, but of the individuals who comprise its core, is what keeps McMinn positive about the future despite a year full of unexpected difficulties, growing pains, and logistical challenges. “My main hope for this program is that God gets the glory and that we can crank out really excellent women into the world who are capable of handling whatever challenges life throws at them,” McMinn says. “I want our girls who graduate to be able to go out and make a difference for Jesus Christ.”

As the Warriors continue their inaugural season, helmed by a coach who has grown up with the challenges of building new programs, their focus remains not on wins and losses, but on a commitment to the process and to each other. “Win or lose, we’re committed to keeping our heads down and putting all the work in that we can,” McMinn says. “Eventually, we plan on lifting our heads up and seeing that we are in the championship.”