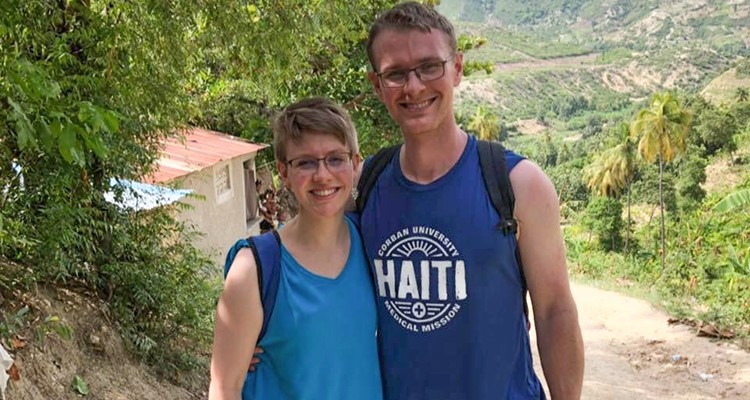 Esther Lehmann, class of 2013, was nominated for this year’s Council for Christian Colleges and Universities (CCCU) Young Alumni Award! The Young Alumni Award recognizes an individual (or a team of individuals working in a joint venture) who has achieved uncommon leadership or success in a way that reflects the values of Christian higher education. Learn more of Esther’s story below.

The TSA official had noticed Esther Lehmann’s stethoscope and drawn this conclusion. If there hadn’t been a line of disheveled travelers gripping their passports impatiently, Esther might have gently but firmly clarified, “First, I’m a physician, not a nurse. Second, I’m not nearly tough enough to be a nurse. So please don’t make assumptions.”

This kind of grit and humility has successfully taken Esther through a bachelor’s in health science at Corban University and then on to Rocky Vista University in Colorado to earn her doctorate in osteopathic medicine.

Esther first fell in love with medicine as a high school student when she volunteered on the medical-surgical floor of her local hospital. Her vision broadened as she contemplated that the need for modern medicine, while great in the U.S., was greater in other parts of the globe. “There was never a single epiphany moment,” says Esther, “but over time and through a variety of influences I began to feel God’s call on my life toward international medical missions as a physician.”

During Esther’s time at Corban University, some of her classmates caught on faster, but none studied more diligently. Esther pushed through difficult classes such as physics and organic chemistry. Dr. Jim Dyer, her chemistry professor, comments, “There were many times when Esther was not sure if she had what it takes to become a doctor. I, as well, wondered if she would make it (but not if she could make it) to the finish line of her dreams and aspirations. Nonetheless, during the whole journey she stayed focused, humble, and diligent.”

Dr. Sarah Comstock, the faculty supervisor, says, “The trip has been happening for eight years now and is an integral portion of our Health Science program. Every year we take 12–15 students and another 15 or so medical providers and nurses. This trip provides students an understanding of the role of health care in the developing world.” Students who go on the trip are required to take a course called “Health Care Practices in the Developing World” to prepare for the challenges they’ll face—treating hundreds of patients with limited supplies and resources, dealing with the sight of grisly wounds for the first time, and even witnessing death. Students often come away having learned the limitations of modern medicine—but the limitless power of God’s grace and comfort.

Esther’s role as a student-leader helped shape the foundation of what is now a life-changing experience for health science students at Corban University—many of whom, like Esther, have been inspired to serve the developing world.

“It was through these trips that my limited cognitive understanding of global need came to life as I was able to see the need and experience the challenges of medical mission work,” says Esther. Little did she know that she would be returning and joining Corban’s mission trip several years later. The summer after Esther earned her Doctor of Osteopathic Medicine, she returned to Haiti not as a student but as a medical provider, coming alongside the next generation of Corban students and serving her very first overseas patients.

Esther still has a ways to go before medical missions becomes her career. Almost immediately after her recent trip to Haiti, she began her three-year residency with Ellis Medicine in Schenectady, New York. “It’s a long way from my Oregon home,” says Esther. “However, with a strong obstetrics program, a global health club, and an established ultrasound curriculum, it’s the program I felt would best prepare me for what God has called me to.” She’ll be focusing on pediatrics, outpatient family medicine, emergency medicine, and inpatient medicine.

Although her journey as a physician is just beginning, Esther has already left behind a legacy of character and competence as she’s demonstrated the love of Christ in her life and work. Dr. Ryan Stark, one of Esther’s professors at Corban, says, “Esther Lehmann set a wonderful example as a student at Corban, mature in her faith and serious in her studies. She’s a shining example of the type of student we hope to produce: well-rounded, biblically literate, and highly capable.”

Esther would probably downplay this high praise, citing the professors who believed in her and encouraged her as the reason for her success. But the grit and determination to succeed are all her own, and her hard work and heart for missions have left a lasting impact on Corban’s health science program and the students it serves.