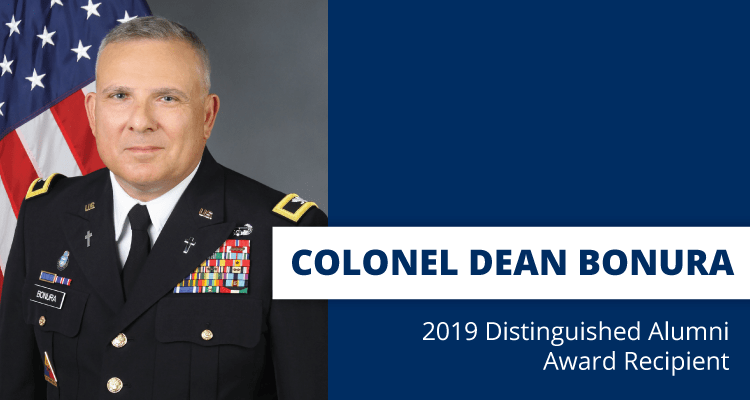 Col. Bonura, who graduated from Corban University (then Western Baptist) in 1978 with a bachelor’s in ministry, has had a distinguished 35-year career in the U.S. Army, including 30 years as a chaplain on active duty.

Col. Bonura has served in the 101st Airborne (Air Assault) Division, the 3rd Infantry Division (Mechanized), the 2nd Armored Cavalry Regiment, and the 1st Armored Division, with whom he deployed to Iraq in 2003-2004.  He also served with the 1st Corps Support Command during Operation Desert Shield in Saudi Arabia and Operation Desert Storm in Iraq (1990-1991).

As a chaplain, Col. Bonura experienced the impact of combat on men and women, and worked with countless individuals to provide support and help facilitate healing in the midst of Post-Traumatic Stress Disorder (PTSD).

In response to his experiences, Col. Bonura authored the book Beyond Trauma: Hope and Healing for Warriors: A Guide for Pastoral Caregivers on PTSD, which was published in 2016 by Westbow Press, a division of Thomas Nelson and Zondervan (recently republished through The Warrior’s Journey, an online resource for military, veterans, and their families). Col. Bonura’s book addresses the importance of biblical spiritual principles in the healing process, and emphasizes that the spiritual side of trauma cannot be ignored as individuals seek healing from grief, guilt, and shame. He’s also written a program based on the book called “Strong Heart Warrior.”

Col. Bonura has also written sermons and articles for other publications, including “Spiritual Patriots” in the anthology Be Strong and Courageous: An Anthology of Sermons to Warriors and “Combat Trauma, Resiliency and Spirituality” for The Army Chaplaincy, professional bulletin of the unit ministry team. In addition, Col. Bonura currently writes for The Warrior’s Journey (for which he also serves on the board of advisors) and has authored four discussion guides, the latest of which is for the film “Indivisible,” based on the true story of Chaplain Darren Turner.

In addition, Col. Bonura earned his Doctor of Ministry from Gordon Conwell Theological Seminary. He and his wife Denise have five grown children, three of whom have served in the military.

Dr. Jim Hills, Professor of English at Corban University, says of Col. Dean Bonura, “‘Making a difference in the world for Jesus Christ’ covers a lot of ground. In Dean’s case it has meant putting himself in stressful and lethally dangerous circumstances to offer Christian wisdom, comfort, and healing to men and women serving our nation.”

Join us in congratulating Col. Bonura and thanking him for his service to our nation and the men and women who so faithfully protect it.

Corban takes pride in equipping its graduates with biblically-centered education, training, and service so they can make a difference in the world for Jesus Christ. With these tools, countless alumni have gained unique distinction in their professions, ministries, and communities. It is our pleasure as a university to recognize and celebrate these achievements. Learn more about Corban Alumni Awards eligibility and criteria at www.corban.edu/alumni/corban-alumni-awards.

Nominations are accepted on a rolling basis, with awards given in two categories – Young Alumni and Distinguished Alumni. Submit a nomination here.