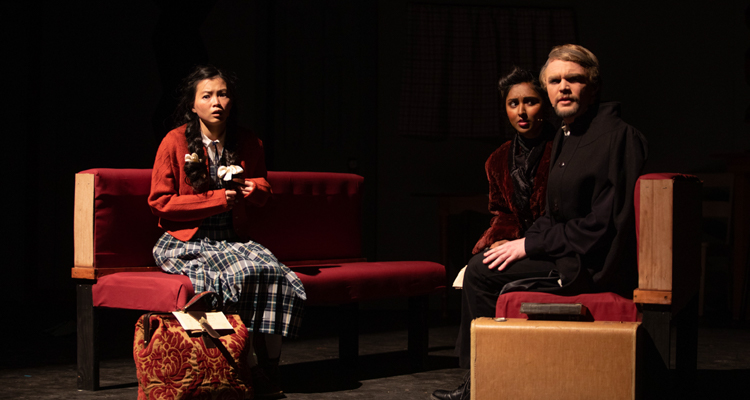 “Things are replaceable. Lives are not.” ─ Léon Simon, Remember My Name

Snippets of wisdom like this one, gleaned from the tragedy of our world’s historic past, ring out as poignantly as the opening gunshot of Joana Halpert Krauss’ award-winning play.

Remember My Name follows the story of a young Jewish girl, renamed Madeleine Petit by her father, and her struggle to survive in war-torn France during WWII. From the chaos of the opening sirens, we are reminded of the ease of human hatred in any generation, but also of the stark impact of uncommon courage, generosity, and sacrifice displayed through the cast of characters that help Madeleine along the way.

Directed by Tamara McGinnis, the drama leans heavily into the moral philosophy of courage in the face of evil and the power of human love displayed through sacrifice. From the moment the lights first reveal the stark stage setting, to the triumphant closing of the curtains, the players from Corban’s Theatre Department guide us through a narrative packed with meaning and wisdom that is applicable to today.

Highlighted by the spirited trio of Madeleine Petit, Marie-Thérèse Barbière, and Suzanne Fleury, played by Jasmin Lee, Amber Davis, and Deborah Makinster respectively, Remember My Name is character-driven. As Corban’s cast interweaves and unpacks the complex character relationships forming on stage, the audience is subtly guided through the moral complexity and dilemma of Nazi-occupied France. What we are left with is a sincere examination of seldom-touched topics such as grief, loss, and human evil, lightened by the eventual triumph of commitment, courage, and love.

Like young Madeleine in the play, these past years have left many of us waiting by the window, unable to fully grieve what has been lost. In moments like this, we can take comfort in the words of Marie-Thérèse Barbière. “When a river is swollen it floods,” she says as she tenderly encourages Madeleine to grieve rather than stifle her emotions and reminding her that “Nature knows more about healing than we do.”

Krauss’ drama presents an environment that is at once rooted in the concrete and inescapable reality of Earth, and yet takes moments to approach the divine. In the face of human prejudice, which seems to have just as much relevance today as it did in the 1940s, we are reminded by Père Antoine, played by Brycen Common, that “differences down here don’t seem as important up there,” referring to heaven.

Throughout the skilled performance, the audience is given the opportunity to sink into the drama and empathize at every step along the way. As a result, we share in both the sadness and celebration, remembering the early line by Madeleine’s father, “There are times when you can either laugh or cry. Léon Simon chooses to laugh.” This play promises both responses in equal measure.

Remember My Name offers a wide array of impact, meeting people where they are with its honesty and wisdom. Fans of drama, history, and narrative alike will not want to miss this production. We are ultimately left on a high note, as the play which began with a gunshot ends with a dance.

Corban Theatre Department’s production of Remember My Name will be available to view in-person and through live stream now through November 21. To view show times and to purchase your tickets, visit: https://www.onthestage.tickets/show/corban-university/remember-my-name-79332/tickets