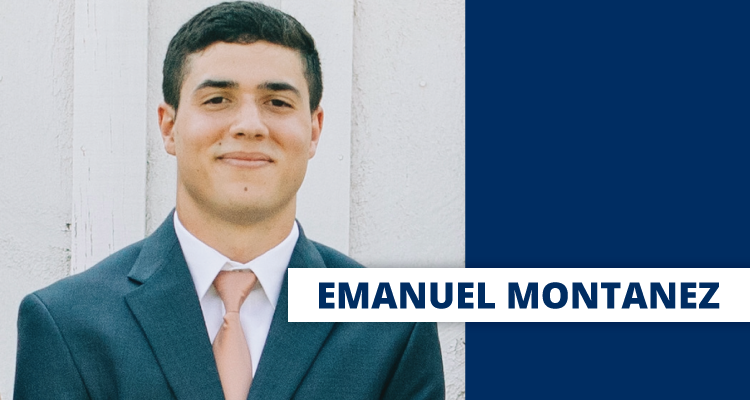 Montanez, who also received his undergraduate degree from Corban in biomedical sciences in 2020, was one of five applicants selected out of a pool of over 1,000. He describes the program as an “internship on steroids.” Structured as a two-year, full-time, salaried position with benefits, the rotational program takes emerging talent through four major sectors of the pharmaceutical industry.

For Montanez and the pool of 1,000 applicants, most from the Ivy League or major California tech schools, the interview process was intense—a five-phase evaluation culminating in a video panel interview. “All the interviews were at the end of the workday when I was already exhausted,” Montanez says. “And for my video interview, the fire alarm went off right in the middle.”

Despite these added challenges, Montanez’s name rose to the top of the list. One advantage was that he was already an intern at Genentech’s commercial department, Access Solutions, but another major distinguishing factor was his Corban MBIA degree. “It was one of the things that the selection panel really said stood out,” he says. “And it was also a major reason why my mentor originally thought I would be a good candidate for the program.”

As an intern, Montanez began to learn the ins and outs of the industry. “There was so much to health care that I didn’t know,” he says. His initial internship took him through four distinct positions within Genentech’s healthcare arm: patient navigator, case manager, reimbursement specialist, and foundation specialist. In each position, he was able to help start patients on their path to recovery. But as the internship, with its more natural progression toward med school, came to a close, Montanez began to realize a different path for himself.

Through his time as an intern at Access Solutions, Montanez began to see a shift in the company’s hiring focus. “I think a lot of these large biotech companies are moving more toward data analysis, not only in their research and development, but in their operations and finance as well,” he says. “The biotech sector is a little behind the big tech companies and they are trying to catch up and hire more people with an information and analytics background. Automation, A.I., machine learning, and advanced data analytics are all hot topics at the moment.”

With the value of an MBIA degree on the rise in these major biotech companies, and Montanez no longer looking to embark on the medical school path, he knew it was a degree he wanted to pursue. The unique blend of personalized focus and flexibility moved Corban’s program to the top of his list. “It was way more affordable, for one,” he says. “But I also thought it would be a good balance between hard science and business. Because business can be applied into any sector of interest.”

Due to the convenient structure of Corban’s online graduate business programs, Montanez was able to complete his degree in one year while working at his initial Genentech internship. “I loved the flexibility of it in that I was able to work a full eight hours and pay off the program as I went through,” he says.

Corban’s online MBA and MBIA programs are not cohort-based and classes start every eight weeks, giving students the ability to take classes on an unpressurized timeline that fits their schedule. Manageable weekly workloads, Sunday night assignment deadlines, and flexible opportunities for video conferencing with fellow students and faculty make completing the program while working a full-time job feasible.

The ability to prioritize his further professional development without sacrificing his career progression allowed Montanez to glean crucial knowledge and experience through both his MBIA and his Genentech internship—a foundational piece to his future career goals. “It was a wonderful opportunity, especially given the state of the field this past year,” he says. “It was very rewarding to work with the Genentech Patient Foundation and be that last line of defense and make a massive impact on patients’ lives by saving them thousands of dollars for these specialty treatments. Being able to approve them to receive these lifesaving treatments for free was incredible.”

As Montanez transitions into his new ORDP rotational program, he will now have even more opportunities to be involved in frontline research, pharmaceutical development, manufacturing, and distribution of lifesaving treatments, combining the scientific knowledge of his biology background with the analytical focus of his MBIA.

“The classes I took during my undergrad will help me with my coming job which deals more with manufacturing and making sure these drugs are produced at a high level,” he says. “This program has been known as a talent pipeline for the company. They want to retain their candidates and do a lot of leadership programs, so It’s a really great kickstart into my professional career.”

But his biology background is not the only thing from his Corban undergraduate experience that is being brought back to the forefront through this opportunity. Through its parent company, Roche, based in Europe, Genentech also hosts a travelling company soccer team that regularly plays games throughout Europe. Montanez, a four-year letterman for the Warrior men’s soccer team, looks forward to reigniting his passion for the sport while also furthering his career goals. “That would be the icing on the cake for me,” he says. “Playing soccer at Corban under Coach Kagey instilled in me my work ethic and desire to push myself. Those lessons carry me to this day.”

As Montanez prepares for this next step on his career path, he often takes time to recall where his journey started. “Corban University has educated and influenced me in countless ways that have set me on this path,” he says. “The relationships I made there, and the experiences I was given, instilled in me that discipline, not just for my career, but to dig into the Word and live in a way that I probably wouldn’t have had I not gone to Corban.”

Empowered by a purpose that extends beyond profession, and equipped with the knowledge and expertise to succeed, Montanez looks ahead to a career in the exciting new convergence of the biotech industry and business analytics. “This is an amazing opportunity for me,” he says. “Not only to have a massive stepping stone into my career future, but for whatever else God has for me after this.”