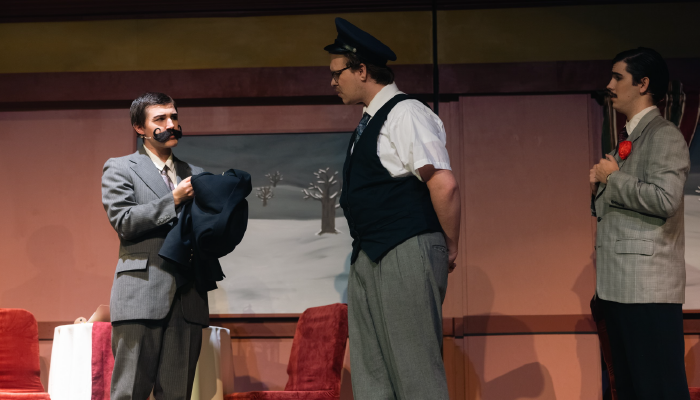 Mystery, misdirection … murder—do you have the wits to solve the case? Starting November 10, and running through to November 20, Corban University Theatre will be staging Agatha Christie’s acclaimed mystery, Murder on the Orient Express.

When an American tycoon is found dead inside his own locked train compartment, it’s up to famed Belgian detective Hercule Poirot to solve the most convoluted case of his career.

The Corban University Theatre Department’s presentation is full of classic mystery flare and drama, but punctuated by a surprising amount of humor as the cast of colorful characters continually breathe life into a plot dominated by one looming death. Audience members should be prepared for as many one-liners and witty quips as riddles and red herrings.

From the opening curtain, Declan Ritter’s portrayal of Monsieur Bouc, director of the renowned train’s operations, and friend of Poirot, leaves the audience wondering if they’ve entered the wrong theatre in the best way possible, as comedy remains king for much of the first act. For example, Deborah Makinster’s portrayal of fiery and outspoken Minnesotan, Helen Hubbard, is worth the price of admission alone. Much like the investigation itself, the quirky cast is held together by the steadying role and performance of Noah Linhart as Hercule Poirot.

Thrills and intrigue aside, the play delivers far more than the traditional murder mystery, leaving something for everyone, not just amateur detectives and fans of the genre. “Murder on the Orient Express is one of Agatha Christie’s most captivating mysteries,” says director Tamara McGinnis. “It will challenge you, intrigue you, and leave you thinking not just about ‘who done it,’ but about justice, love, the legal system, and human nature.”

The plot leaves room for the audience to ponder over the possible motives of each passenger on board the Orient Express, the perfect pace for those who love to try and figure out the conclusion before the final curtain. But solving the mystery is no small feat, as you’ll likely find your progress toward the final reveal derailed time and again as each suspect presents a viable alibi. Even after the cast and characters go their separate ways, the shocking resolution may haunt you, leaving you to wonder what was in fact the truth and what was the lie.

Can you beat the famed detective and his equally famous mustache to the play’s shocking conclusion? Purchase your tickets to ride today by visiting  https://www.onthestage.tickets/show/corban-university, and get ready to board the Orient Express.