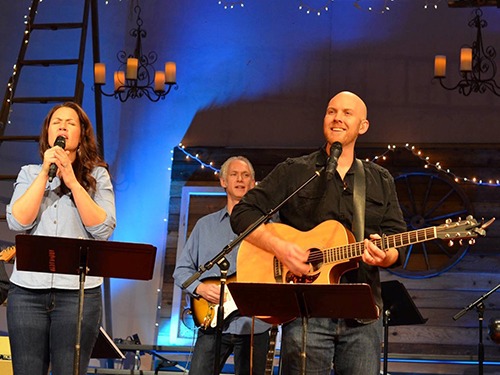 “I can hear music,” says Liz Dunn. “A clear idea for a song will come—most of it right away. And not just words. The music and the words come together.”She’ll be on a run in the cool morning air, jogging a mostly-empty route, hearing only birds singing and her own sharp breathing. She’ll hear her thoughts too: prayers, things that are heavy on her heart, Scripture she’s memorized.And then out of the gentle chaos of birdsong, misty fall air, and prayers, a bass note will sound.Then the strike of piano keys. Syncopated, controlled, a little jazzy.

By the time she’s jogged back to her doorstep, invigorated and out of breath, the whole song will have formed. “I write down everything right away, and then later I fix it,” Liz says.

Liz (Hamre) Dunn and her husband Nate Dunn are both alumni of Corban (’00 and ’99, respectively). And while Nate is the only one who formally studied music, both husband and wife are musically gifted. (“She’s a much more gifted musician, and I’m more trained,” Nate will say). They’ve been singing and writing together since they were both involved in music at Corban. Today they write for Melody & Truth, a group comprised of Nate, Liz, and a revolving collective of local musicians.

There are a lot of reasons to write music, but Liz and Nate’s reasons are summed up in the title of their group: to give the Church a melody to sing, and to communicate the truth about God to the world.

As Director of Worship & Arts at Salem First Baptist Church, Nate is especially tuned to current conversations surrounding worship. What makes a song “good” for congregational worship? What works well musically, and what is most effective lyrically and theologically? A song might be beautiful, but is it easy to sing along to? A song might be easy to sing, but does it direct your eyes and thoughts toward God? It might be spiritual, but do the words convey truth?

These questions guide Nate and Liz as they write music to help give the Church a voice to sing.

“The Musicians Have a Party”

Although they have fine-tuned their songwriting process over the years, collaborating hasn’t always come naturally for Liz and Nate. While conceptualizing a song comes easily to Liz, communicating that conception to others often comes with challenges. In their early years writing music together, she would come home and enthusiastically describe to Nate a song she had envisioned. But without formal musical training, Liz found herself saying things like, “It sounded funky,” or, “I sing this line, and then the musicians have a party.”

Although Nate is well-versed in music theory, technique, and terminology, he wasn’t sure what his wife meant by “the musicians have a party.”

“The early years were painful because I didn’t understand what she was saying,” says Nate. “I would say things like, ‘You can’t do that.’” But Liz would insist, “Well, it’s going on in my head that way, and that’s how I want it.”

Thus, the identity of Melody & Truth took shape: a singer/songwriter duo joined by a revolving collective of musicians. Depending on the style of the song they were working on, Nate and Liz would seek out someone skilled on the trumpet, someone who could play keys, and watch as God miraculously provided exactly what they needed.

Although Nate and Liz write in a variety of styles and genres, “The common language that we write in is folk rock,” Liz says, “along the lines of 70s and 80s singer-songwriters like James Taylor and Carole King.”

“The melodies are good, the lyrics are good,” Nate says, explaining that folk rock lends itself to testifying with its rich lyrics and prevalent vocals. While Nate and Liz aren’t afraid to have fun with a saxophone or a guitar solo, the message remains primary, and the words they’re singing are never obscured by the track.

“A lot of [worship] music today starts so introspectively that it struggles to get to where God is,” Nate reflects. He’s quick to clarify that there’s nothing wrong with songs that foster introspection and emotion, “but since we’re writing for the Church, we’re writing to hopefully take people’s eyes off of whatever’s going on in their life and direct them on God.”

Liz agrees. “My heart is not corrected and brought into alignment by only singing about my feelings. And that alignment is what I’m crying out for.”

Thus, most of the music from Melody & Truth functions either as a prayer or as a way to testify and declare truths about God. For Nate and Liz, these are two of the primary functions of music intended for worship.

As they seek to create new music for the Church to sing, Nate and Liz also recognize the depth and richness of the music the Church has been singing for tens and even hundreds of years.

This past November, Melody & Truth released its most recent album “Psalms, Hymns and Spiritual Songs, Vol. 1.” If the title of the album doesn’t already convey a hearkening back to the decades and centuries of music used to worship the Lord, the album cover certainly does—it’s styled like the cover of a well-worn leather-bound hymnal.

“Right now everyone’s in love with the new, the modern, the current,” says Nate. “But I think God wants to communicate to us, ‘I’ve got a story that I’ve been writing for thousands of years. You happen to be living in today’s part of the story, but don’t discount everything that’s come before you.’”

In several songs, Nate and Liz have taken traditional hymns and rearranged or written new choruses for them. “Mind of Christ,” for instance, is largely based on the traditional hymn by that name. “It’s such a beautiful prayer,” says Nate, “but it’s not a song anybody’s going to sing in contemporary worship because of how it was styled—it was written in 1925.” So Nate and Liz restyled it a bit, added a new chorus, and “now people are singing that song again in different churches. They’re experiencing it in a new way.”

Whether they’re reviving old melodies or creating their own, Nate and Liz seek to write music that meets a need in today’s churches: the need for songs that convey the truth of the ages, songs that convey the beauty, richness, and creativity of God in a variety of musical styles, and songs that a congregation can sing. Liz admits that many of the songs don’t utilize her full range, and they could easily have been written in more challenging keys, but the purpose of this album isn’t only to make something beautiful—although beauty is certainly present. It’s to help the Church discover new—and rediscover old—ways to worship the Lord through “Psalms, Hymns & Spiritual Songs.”