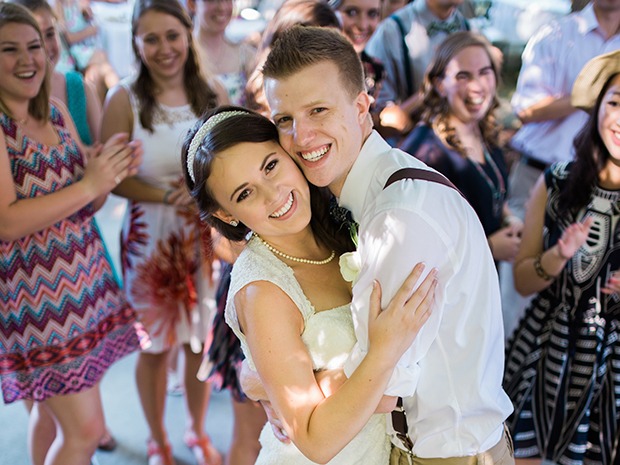 Marissa (Garnett) Lyda, Corban Alumna, is the author of The Budgeting Wife, a blog in which she shares her story of becoming debt-free and encourages others who have begun the journey of paying off their loans and living in financial freedom.

Perhaps you’ve heard Dave Ramsey’s adage and wondered what it meant—or knew what it meant and shuddered, thinking of all the lattes and fancy dinners you’d have to give up if you took his advice.

Or perhaps you’re like Corban alumni Marissa (’15) and Jacob Lyda (’14), and actually lived by it—you made sacrifices in the short-term, and now you’re enjoying the financial freedom that allows you to pursue your long-term dreams and goals.

But what exactly did all of Marissa and Jacob’s short-term sacrifices add up to?

That’s right. This past October, Marissa and Jacob made their final payment on their combined $87,000 in student loans—just 2.5 years after Marissa graduated from Corban.

When asked how her journey toward paying off so much debt began, Marissa says, “As silly as it sounds, it was realizing that I knew nothing about my financial well-being.” Her senior year at Corban University (studying Business Accounting, ironically), Marissa didn’t know exactly how much debt she had taken on. “I could ballpark it, but I didn’t know the exact amount. How scary is that?”

Even after she’d done the math and realized she’d taken out $40,000 in student loans, she realized she knew very little about how much she’d be paying in interest, or even how to go about making payments.

That was all about to change.

In the fall of 2013, Marissa and Jacob had taken a class at Corban based on Dave Ramsey’s Financial Peace University. “We’d had a previous understanding that ‘debt is bad and saving is good,’ but after taking the class, we had a game plan for our finances.” Even though they had only been dating when they took the course together, the Personal and Family Finance class helped Jacob and Marissa enter marriage on the same financial page.

Three months after graduating, Marissa married Jacob, and together they decided to buckle down and pay off their loans. Initially, their goal was to be debt free by 2020.

“Coffee and eating out was one spending decision that had to change during our debt-free journey,” Marissa shares. “When you’re in college and hanging out in the dorm, a friend might say, ‘Let’s go to Buffalo Wild Wings!’ And you don’t want to miss out, so of course you go. But when we were working on paying off debt, we became very mindful of this.”

Eating out less was just one of the many sacrifices Jacob and Marissa made. To save on transportation, they took the Max to commute from Hillsboro to downtown Portland. It made for a “long, crowded, and sometimes smelly commute, but it allowed us to only spend $50 a month on gas for both of our cars.”

Often the things they had to give up were different. While Jacob had to be conscious about how much he was spending on his truck, Marissa had to be careful about spending money on home décor. “I love going to Target to pick out cute decorations to make our place feel like home.”

But making sacrifices didn’t mean giving up special experiences entirely. “One thing we absolutely loved—and which kept us sane—was receiving gift cards.” Whether for Christmas, birthdays, or anniversaries, the occasional gift card allowed Marissa and Jacob to enjoy some of their favorite places, guilt-free.

Although avoiding places like Starbucks and Target made a huge difference, the real game-changer, Marissa shares, was moving in with her parents for reduced rent. The 14 months Jacob and Marissa lived with her family, combined with smaller sacrifices, allowed them to put 70% of their combined income toward their student loans.

“Vacations,” Marissa says, when asked what else they had to set aside. “I love a good sunny beach and would be totally fine spending money to go on vacation, but this is where my husband helped hold us accountable.” She’d see friends posting pictures of their vacations to Hawaii or Europe, and she says, “Honestly, a few times we came so close to booking a vacation and giving up on the journey.”

While vacations could wait, some things—like buying new tires for Marissa’s car—couldn’t. “It was hard to put money into our old cars, but safety always comes first.”

Giving came first too, and Jacob and Marissa never stopped tithing to their church. When asked why, Marissa says, “It all comes down to stewardship and your perception of money. The Bible tells us that everything in this world belongs to God.” Thus, Marissa and Jacob’s first priority was to remain faithful givers to His Kingdom. “We tithe each month to the church, support a couple of children in Rwanda through Africa New Life, and even created a fund for ‘extra giving’ each month. It’s really shown us how fun it is to give and use the resources that God has gifted us with.”

When Jacob and Marissa made the last payment toward their loans, they celebrated by going on a Caribbean cruise. “We hadn’t been on a vacation in over a year and a half, so it was nice to finally take a break and go on a wonderful, sunny vacation.” They’ve already got their next trip booked: Kauai next May. “When you don’t have debt payments consuming your budget, you have the freedom to do what you love.”

“After being on this journey for 2.5 years and paying off $87,000 of student loan debt, many people ask me if going to a private Christian university was worth it,” says Marissa. “And I totally think it was.” She quickly adds, “I got to meet the love of my life in college, so you can’t beat that!” But she also cherishes the biblical education she received and the Christian perspective toward business she gained in her business classes. “Our experience at Corban was amazing, and we are so thankful to have had the opportunity to attend such a wonderful school. The friendships we made and the knowledge we gained will be with us for the rest of our lives.”

When asked what she would say to current or future students who are worried about debt, Marissa says, “It’s honestly good to be a little stressed when you realize how much debt you’re taking on. This will keep you motivated to get it paid off!” But, she adds, “Don’t let the stress consume you. Anyone can pay off debt. It just depends on how willing you are to make the sacrifices and stay committed in your journey. Making small dents in your debt will add up.”