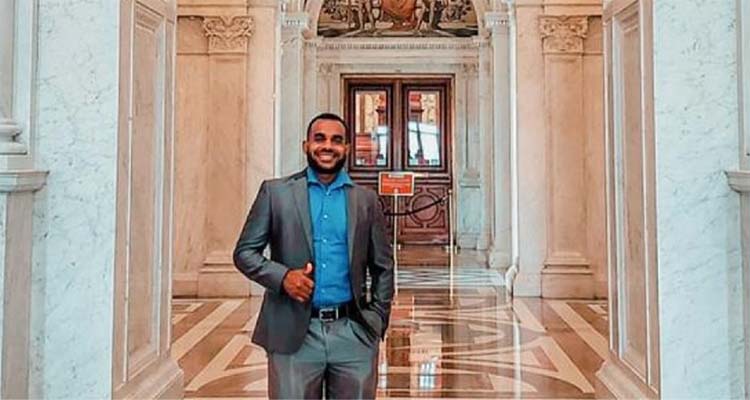 When Korwa Wanimbo landed in Washington, D.C., it was instant culture shock. “The first time I arrived in the airport, I was like, ‘Really?’” he remembers. “I come from a very small town and all of the sudden I was in a big city.”

But the small town Korwa comes from is not your typical American small town. It’s not even in America. Korwa is from the small island of Papua, a remote province of the island nation of Indonesia. Nearly 7,000 miles from his home, even Corban’s small, intimate campus was a shock when he first arrived. But cultural differences did not deter Korwa from seizing his opportunity.

As a select student, chosen by the Papuan government to study in the United States with the hopes of returning to make a difference in Papua, he used his time at Corban to develop his political acumen while cultivating a multicultural framework for future service through politics. After graduating with a degree in Political Science in May of 2021, Korwa continued to excel, securing a highly competitive and prestigious internship with the Indonesian Embassy in Washington, D.C.

“I am really interested for my future career to be in politics and to become a leader to help my people back home in Papua,” Wanimbo says. “Washington is a place where I feel like I can grow my career. It’s a place where I can talk with leaders face-to-face and learn.”

But this was not always Korwa’s viewpoint. His time at Corban became a pivotal step on his path toward servant leadership. “Before I came here, I didn’t want to do my internship in the Indonesian embassy,” he says. “They all had a different faith than me.”

Indonesia is the largest Muslim majority nation in the world, comprising over 12.7% of the world’s Muslim population. Because of this, Korwa knew that the vast majority of his colleagues and superiors in Washington, D.C., would share a belief system that was often hostile toward his own.

But as Korwa grew closer to his tight-knit campus community at Corban, he began to encounter a different viewpoint. “A lot of Corban staff and friends encouraged me to do this internship and pray that God would use it,” he says.

He remembers many discussions with Associate Professor of Political Science, Dr. Tony Caito, all revolving around the intersection between faith and profession. “He told me that as Christians, we have to love even our enemies, and we have to do the right thing,” he says. “I prayed to God, and God told me it is not right to think the way that I was, that I have to go forward and be an example for others, no matter what race, background, or religion they are. I had to bring my faith to where I was going.”

As a result of his decision to step out in faith, Korwa now has access to some of the most influential figures in Indonesian politics. “Every day, I am meeting the ministers and leaders between Indonesia and America and learning by asking questions,” he says. “And I’m not only meeting people who work for the Indonesian embassy, but people who work all over the world. I’m building a network for the future, to one day help Papua, and I think that is the most important thing for me here.”

Dr. Caito is proud to see the gospel call on Korwa’s life coming full circle. “The Indonesian government sent Corban a young Papuan man full of promise. We all faithfully poured into him, and now he is prepared to return to his people as a public servant,” he says.

Korwa now looks at each day as a new opportunity. “God has blessed me, and every day I am so excited to do my work here,” he says. “I just want to help educate my generation, because there is a lack of education in Papua. I came here to get the knowledge in Washington, D.C., so that I can bring that knowledge back to Papua and help through my experience.”

Each year, as Korwa sees more international students coming from Papua to Corban, he prays that they will cultivate a similar mindset. “I hope they are thinking the same way as I am,” he says. “If they have the opportunity to do internships like mine, I hope they can bring themselves to do it so that, through their internship, they can bring something back to Papua, and also make a difference while they’re here in America. Because people in America need Jesus, too.”

While it was Korwa’s effort and dedication that secured him his prestigious D.C. internship, it was his faith and the support of his Corban community that brought him the courage to pursue it. “I am the only Christian in the embassy. I have to be a witness,” he says. “I don’t want to just be a follower. I want to be a leader and help those who need it most.”

For Korwa, the drive behind his desire to lead ultimately comes from a love for his people. “I want to see leadership skills grow in my generation in Papua,” he says. “Corban’s mission is to make a difference in the world for Jesus Christ,” he says. “So, when I came out to do my internship, I knew I had to bring something to Washington to make a difference to people around me through my work, and then to bring something back home to Papua, all for God’s glory.”