Love Sinks In: Alumni Jenni and Courtney Install Sinks for the Homeless in Downtown Portland 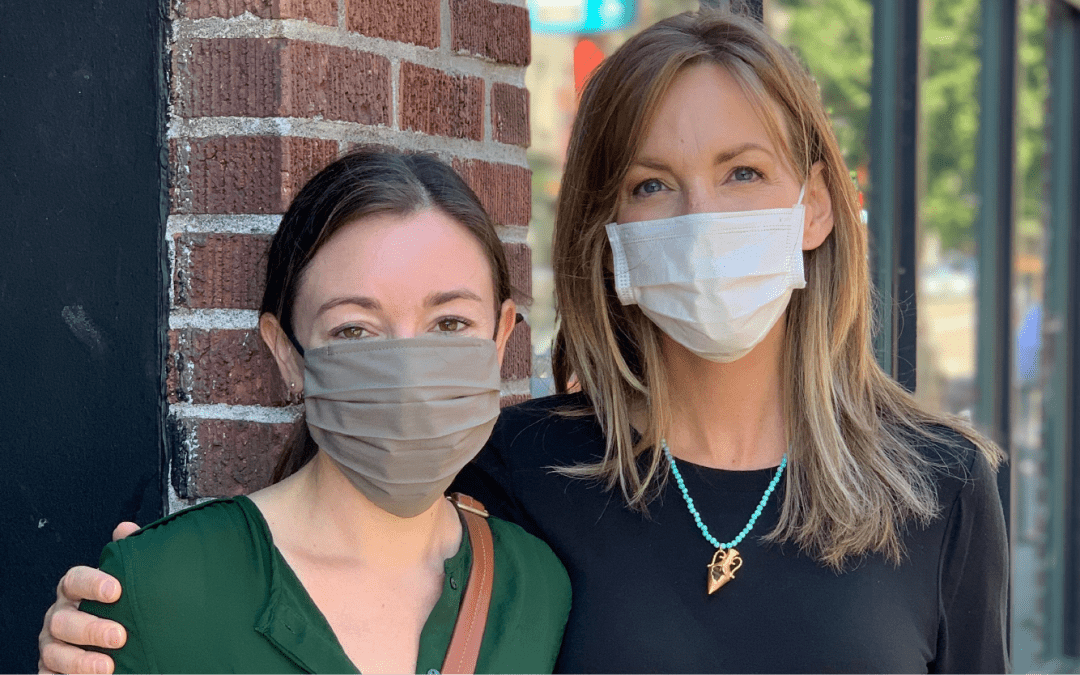 When Jenni Burke’s coworker, Tawney Johnson, first mentioned one of their client’s new initiatives to set up handwashing sinks for the homeless in impoverished downtown areas, Jenni knew exactly who to call. Burke is president of Illuminate Literary Agency, a self-described “boutique literary agency that helps purposeful authors build thriving writing careers.” But long before she stepped into the world of professional publishing, she stepped onto Corban’s campus as a young, idealistic freshman looking to make a splash in journalism.

It was here, in her Corban core group, that Jenni met Courtney Dodds. The two became friends, served on Mexico mission trips together, worked together in the admissions office after graduation, and stayed in touch throughout the years. Courtney is now the Communications Director at Union Gospel Mission, a nonprofit which serves people who are experiencing homelessness in downtown Portland, so when Jenni heard about sinks for the homeless, Jenni called Courtney.

“It was nice to get to work on something with Courtney that brought our two worlds together again,” Jenni says. She put Courtney into contact with her client Terrence Lester’s nonprofit, Love Sinks In, and Illuminate Literary Agency financed the cost of shipping for the installation of three sinks in downtown Portland. UGM committed to helping with the sink installation and managing their upkeep.

Courtney was thrilled to receive Jenni’s call. The timing was perfect, as UGM continued to try to find new ways to provide for people in need. “There’s been a lot of attention given to hygiene and handwashing among the homeless community, especially since the pandemic,” Courtney says. “Access to restrooms, running water, and hygiene in general is always a challenge and the more things we can provide for people who are currently living outside, the better.”

With the advent of the pandemic, handwashing and hygiene had been at the forefront of Jenni’s mind as well, especially as a mother of two young children, William and Violet. Every day, she stressed the importance of handwashing to her kids. When she decided to collaborate with Love Sinks In, and Courtney at UGM, she realized the discussion with her children had to extend beyond her household and capture the reality of those in need.

Jenni and her husband, Seth (also a Corban alum), sat around their dinner table and addressed the problem with their kids. “We talked about what it would be like if we didn’t have a sink. What if we didn’t have a house where we could safely clean our hands?” she says. “There are people who don’t have access to that.” Her children took it to heart in ways she couldn’t have expected. “Kids just want to help,” she says. “If they see a problem, they have that natural openness to want to make sure things are fair.”

As Jenni’s partnership in this initiative grew to include not only her co-worker Tawney, her client Terrence, and her friend Courtney, but her family as well, the impact of the experience became magnified. Jenni’s kids have grown up in a small town. The magnitude of the problem and pain in downtown Portland could have easily been overwhelming. “For them to see so many people lined up around the block waiting for lunch at the mission, people who are hurting right now, that made a big impact on them,” Jenni says. “Seth and I want our children to become aware that there are really big problems in our communities, and yet, we can still do something to help. We talk about being ‘on a love mission’ together. This was such a valuable life lesson for them to experience.”

Her children jumped into the task. William, an avid Lego engineer and veteran of many Ikea furniture builds with his dad, Seth, immersed himself in helping to assemble the sinks. “They did the first test run of the soap pump and the water pump and washed their hands to make sure it worked,” Jenni says. “They were really excited to get to see it all come together.”

With the help of Tawney, her family, and Courtney’s team at UGM, they installed two sinks in the heart of downtown, near the Mission, and built one more which was later installed at a transitional housing facility. “It was encouraging to see Courtney and their team of people, who are consistently working every day to help people, feed people, give them a chance for a fresh start, do their work,” Jenni says. “And to see the men in their recovery program there making good progress and transforming their lives.”

Witnessing firsthand the power of total life transformation on a person’s testimony was what connected Jenni to this opportunity. Jenni and Tawney’s client, Terrence Lester, was once homeless himself. Through her partnership with Lester, now an author, activist, and founder of Love Beyond Walls, a nonprofit which helps to raise awareness and combat issues of systemic poverty, Jenni has taken seriously the opportunity to embrace Lester’s motto: “Service is a lifestyle, not an event.”

“It’s been an honor to get to be a part of sharing his story,” she says, “because it inspires people to do what they can where they are. It inspired me and my family to want to follow his lead and do something very practical to meet a need.” And her involvement installing sinks for those experiencing homelessness downtown is only a small piece of the lifestyle of service Jenni is striving to cultivate in her own life, family, and business. It extends beyond a one-time act.

“This year has been a wake-up call for all of us. A shift I’ve made personally is to double down on my responsibility to encourage the authors in my care to continue pressing into the unchanging things, like the Word of God, the constancy of His Spirit, His faithfulness, and His truth,” she says.  “They’re the influencers reaching hundreds of thousands. I want to keep encouraging them to draw from the well of Christ, so that what they have to give isn’t just of themselves, or a cleaned-up version of the messages that culture is already offering, but is pointing people to Jesus.”

Since graduating from Corban back in 2004, Jenni and Courtney have leveraged their skills and interests into different career directions: book publishing and homeless services. Their audiences may be different, often radically so, but the impact is the same—lives transformed by the power of God’s love. “Courtney and I took different career paths,” Jenni says, “but God recognized an opportunity for us to be brought back together. These two seemingly separate paths, book publishing and homeless services, allowed us to come together and do something to glorify God, and be of service to our community.”

Illuminate Literary Agency helps authors publish well, succeed faithfully, and thrive. With a combined 60+ years of industry experience and strong relationships with leading Christian publishing houses, the agency is behind more than 3,000,000 books connecting with readers around the world. The company was established in 2006 as D.C. Jacobson & Associates, and is based in Oregon. Illuminate agents specialize in adult nonfiction by authors with large national platforms. For more information, visit www.illuminateliterary.com.