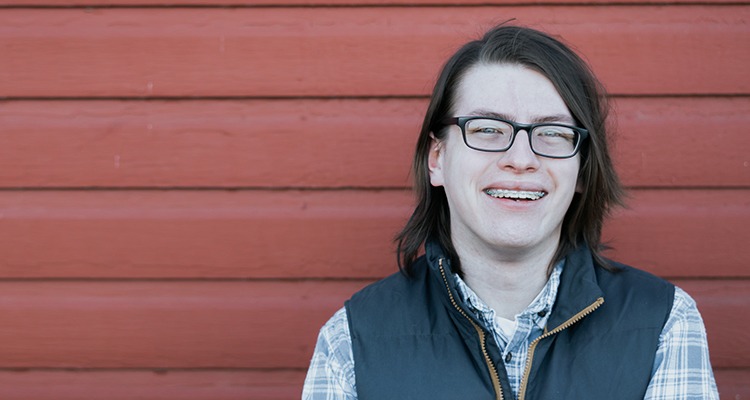 “The world was a lot quieter before I had my hearing aids,” Reed says. It was as if a whole world existed that he’d never known about. He’d grown up on the McKenzie River in Eugene, Oregon, but it wasn’t until he was 7 that he knew what running water sounded like.

When his second-grade teacher began to notice that Reed was missing some sounds—still struggling to distinguish the “s” sound from the “th” sound while other children were losing their lisps—she suggested his parents take him to an audiologist.

“I was fitting with hearing aids—that’s another story through the grace of God—and that revolutionized my life.”

Reed had always known that he wanted to attend Corban University, but it wasn’t until high school that he made the decision to major in health science and pursue a career in audiology. He remembers mentioning the idea to his audiologist, and she said, “We need as many audiologists as we can get!” As the baby boomer generation grew older, she explained, their need for hearing aids would increase; meanwhile, people in younger generations were damaging their hearing with headphones.

But despite the need for audiologists in America, Reed kept thinking about the even more limited access to doctors of audiology in the developing world. Since the summer before his freshman year of high school, Reed had made several trips to Nicaragua and Peru for cross-cultural ministry. Each time, his heart had been touched. “This world is so much bigger than we think,” Reed says.

If hearing aids had opened his eyes to the sounds around him—from the surge of the McKenzie River to the trickle of the creek on Corban’s campus—going on his first mission trip had opened Reed’s eyes to the world beyond America, a world with its own beauty, needs, and struggles. Reed began to imagine what would happen if he combined his heart for missions with his interest in audiology.

During one of Corban’s medical mission trips to Haiti, led by faculty member Dr. Sarah Comstock, God taught Reed a powerful lesson about what it truly means to serve Him in the medical field and the mission field.

He remembers one particular day in Haiti when the rest of his team left to work at an outpatient clinic, and Reed stayed behind to assist a podiatrist (a foot doctor). In those three hours, Reed would experience some of the most chaotic and painful moments of the entire trip.

During the first hour, “We had this patient come in—a middle-aged man who was fishing out on the nearby lake, and happened to step on glass in his boat.” Although Reed wasn’t yet qualified to administer care, he handed instruments to the doctor as he sutured the grisly wound. “That hour, I call ‘pain,’” says Reed.

The podiatrist had barely finished when Reed turned around to see a nurse hastening toward him. She grasped his shoulders, looked at him, and said, “A family just brought in their dead 8-year-old son. Will you come pray with me, please?” More than a little shaken, Reed followed her into the emergency room, just big enough for two beds and a curtain. On one of the beds lay the body of an 8-year-old child. “Lord, how do I even respond to this?” Reed remembers thinking. He began praying for the family, all the while hearing the mother’s sobs from the waiting room. That hour Reed called ‘death.’

As they were finishing praying, Reed and his team heard a different kind of screaming. “In the OB ward was a woman giving birth, and she was going into seizures,” Reed says. As doctors and nurses filed into the OB ward, Reed stayed back with the podiatrist to help additional patients as much as possible.

After a short while, a nurse rushed into the ER, the baby in her arms. He was slightly premature, but the doctors’ primary concern was the threat of infection. “She had me hold him as all the doctors and nurses stood around us, mentally going through the calculations to figure out how to dilute this antibiotic treatment for the baby.” Reed stood in the middle of the room, dazed by everything he had witnessed that day and the contrast of the premature death of the boy, still lying in the bed across the room, and the brand new life in his arms. He thought of that hour as ‘new life.’

In the midst of those three brief hours, God had shown Reed what pain, death, and new life looked like, but more importantly, he had shown Reed that even medical professionals ultimately have no real authority over life and death. “It’s important to remember that even if you are doing your best to help save someone’s life, it’s not really in your hands.” Although he wouldn’t necessarily want to go through another three hours like that ever again, Reed is grateful for the perspective he gained.

After returning home from the trip, Reed began to talk more with Dr. Comstock about continuing to pursue missions and audiology. She began helping him look for summer internships that would be a good fit. With her help, Reed discovered an opportunity to work in an actual audiology clinic in Ecuador with SIM.

Not only will he be working in an audiology clinic, but he’ll also be working alongside local Ecuadorians. “The fact that I’m going to be able to shadow a doctor of audiology in Ecuador who is Ecuadorean is incredible.” Reed explains that he has never wanted to become the “white savior” of the developing world, but rather to partner with local people and organizations who are already doing incredible work.

But Reed doesn’t shy away from people he doesn’t understand—he embraces the opportunity to broaden his perspective and hear people’s stories. He has been studying Spanish ever since his freshman year of high school, and while he’s a little nervous at the thought of speaking nothing but Spanish for almost three months in Ecuador, he’s mostly excited. After all, God has already helped him overcome one significant barrier to communication by providing him with hearing aids; communicating in another language while learning more about audiology is a challenge he’s ready to embrace.

At the writing of this article, Reed’s trip isn’t fully funded yet, but he isn’t too worried. “I trust that the Lord will let it happen if it’s His will.” If you’re interested in sponsoring Reed Redding’s trip to Ecuador, visit his donation link through SIM.