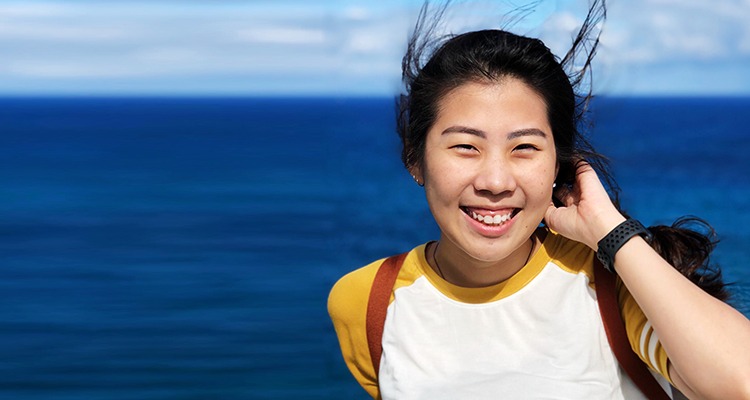 “The ‘e’ is silent,” says Nikki Triestan, referring to the fourth letter in her last name. Although she is Indonesian by passport, she’s Chinese by birth, and in Chinese culture, names must have a balanced number of strokes—particular combinations of even and odd numbers in the first and last name. “It was either add an ‘e’ or take out a ‘k,’” says Nikki. She got to keep the second ‘k.’

Although her name had proper balance, Nikki’s life felt out of kilter growing up, as her own dreams were put on hold so her parents could send her older brother to college. For one year, Nikki even had to take a year off of high school so that funds could go toward her brother’s schooling. Nikki began steeling herself to give up her dream of studying abroad, figuring she could work for a while and eventually pay for college on her own.

At the time, Nikki was frustrated at her parents’ seemingly unfair treatment, but looking back, she says, “Everything happens for a reason.” They saw her ambition, and they knew she would be strong enough to push forward even without their help.

Just as Nikki was preparing to work and save money for school in Indonesia, a family friend named Maria felt God calling her to fund the first two years of Nikki’s education. (By her third year, her parents would be in a position to support her.) “School fees will pretty much be the same wherever you go,” Maria said, “so you might as well go far.”

Overnight, studying abroad became within Nikki’s reach. She began looking at colleges in America, and even a few in Canada. She applied to the big state schools she’d heard of across the U.S., and she was accepted to every school she chose. Corban University wasn’t even on her radar yet.

But through a friend who worked at the local university in Jakarta, Nikki’s mother learned about Corban.

At first, the odds seemed stacked against Nikki attending Corban: Corban required the SAT, which Nikki hadn’t taken. It was a private school, which meant it might be more expensive. And it was past the application deadline.

But with her mother’s urging, Nikki took the SAT and applied anyway.

Corban expedited her application, and Nikki was accepted. She also learned that Corban was offering her more scholarships than any other school she’d applied to. As she’d be financing her education with Maria’s generosity alone (international students don’t qualify for federal loans or aid), Nikki had resolved to go to the school that offered her the best scholarships. Thus, she found herself headed to Corban.

“I didn’t like the hill,” she laughs, remembering her first impression of the university. But she loved the people. Corban offered her the tightknit, supportive community she might not have found at a big state school. She found that close community in her professors who knew her by name, her Resident Assistants, and staff who took the time answer her questions and hear her story. Nikki remembers finding herself in the office of Liane Smith, the Reach and Chapel Coordinator, asking questions about Corban’s community service requirements. After Liane had answered all her questions, she said, “We should go for coffee.” And they did, building an instant connection and starting the tradition of meeting up for coffee once a semester.

While the Corban community helped her feel at home, the academics spurred her curiosity. After taking her first general psychology class, Nikki knew psychology would be her major. She’d always loved learning about the brain and the mind. “I just started to feel connected with the mind and different ways people think—psychology is understanding a human!”

But even more impactful than the study of the human mind was the study of God’s Word. “I came to Corban with faith,” Nikki says, “but at Corban, I grew in knowledge about the Bible.” Before Corban, Nikki remembers people asking her, “Why are you a Christian?” And she’d have no better answer than, “Because I believe in Jesus… Why do you believe what you believe?” But now, she feels she’s been equipped with the tools and knowledge to answer people’s questions about her faith. “Now I actually have a reason,” she says. “My whole dad’s side of the family is Buddhist, so I’ve seen that religion. I’ve seen Islam, because I live in a Muslim country. And I have to say that there is no other religion where our God wants us to have a relationship with him one-on-one. Everything else requires you to go through something; you have to work for it. In Christianity, it’s given.”

At the same time her relationship with God was growing richer, Nikki was rediscovering her love for her family. She remembers dreading going home the first summer. “I just couldn’t handle going back home and being a child again,” she laughs. But the second summer, something changed. “I fell in love with home again.” She found herself seeing things from her parents’ perspective, not just her own. Her attitude toward them was softer, and she began to appreciate all they’d done for her in a new way.

Now, with just one more semester left, Nikki almost wishes she could just go back home to Indonesia when she graduates. But her student visa allows her to work for one year in the States to gain occupational training, so her time overseas will stretch a little longer. She’s considering working with children with special needs, and possibly earning her master’s in health science administration. But the fact that she doesn’t have it all figured out doesn’t seem to worry her. She’s found peace with her family, and she’s found stability in her faith, and together, those things keep her in balance.

Nikki graduates in December 2019 with a bachelor’s in psychology and a minor in forensic psychology.