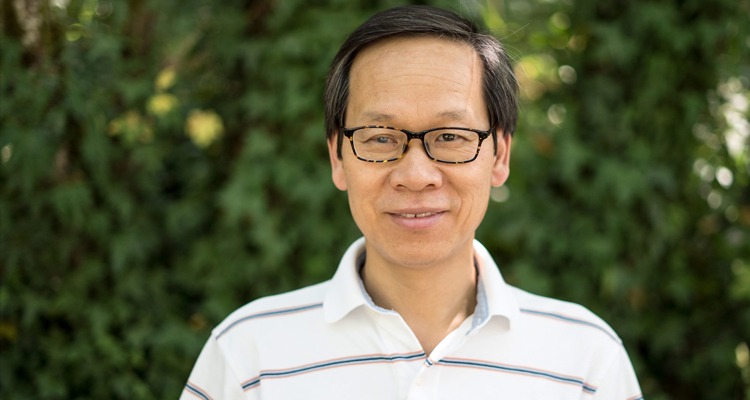 Corban Assistant Professor of Physics, Dr. Yufeng Zhao has partnered with a team at Rice University to conduct groundbreaking new frontier research at the intersection of sustainability and the field of material science.

Zhao, a long-time professional scientist at the National Renewable Energy Laboratory prior to arriving at Corban, was recruited specifically for this project by one of the world’s preeminent chemists, Dr. James Tour, specifically for his experience and expertise in theoretical modeling of atomic structures.

In collaboration with Tour, Dr. Boris Yakobson, and the Rice University team, Zhao will be researching and investigating a variety of catalytic particles and metallic nano particles to determine the efficacy of an exciting new method, published in Nature magazine last year, that has yielded promising results in recycling expensive materials from general waste.

“This method can be used to quickly recycle precious metals from used batteries, which has been a growing problem that we have been facing over the years,” Zhao says. Due to the surprising success of the team’s new method, Zhao has been tasked with using Rice University’s supercomputer, conducting advanced molecular modeling to discover why their process has been so effective.

“Sustainability is a huge topic in modern society,” Zhao says. “We human beings produce a lot of waste. How to regenerate new materials from waste is the big topic. It’s why renewable energy and renewable material science has attracted so much attention in recent years.”

For Zhao, the early returns of his findings have been more than promising. “It’s a new technology. It works very effectively for production of large quantity of new materials, and the energy consumption compared to traditional approach is not very expensive,” he says.

Zhao and the team just submitted three additional manuscripts that are currently being reviewed by some of the world’s most prestigious scientific journals. The research also encompasses exciting new developments in the controlled synthesis of aluminum oxides and metal carbide nano particles. “This new method can control the structure of the nano particles very precisely,” Zhao explains. “It is highly controllable and very unique, because no other method can control synthesis so well.”

Zhao is also tasked with discovering the reason and mechanism behind this high efficiency so that further research can be done, expanding the beneficial applications of this new method.

One early byproduct has been the team’s unique synthesis of a relatively new material called metallic glass—an alternative atomic structure of metal alloys that has exciting potential in a wide range of practical applications.

“This is a promising new material,” Zhao says. “It can be up to three times harder than a normal metal but is very elastic. If you drop a metallic glass ball, it will actually bounce up and down for many cycles.” Part of Zhao’s excitement over his new findings concerns the uniqueness of the specific structure of the metallic glass his team has managed to synthesize. “The motif of the metallic glass is totally new. It’s totally different from conventional ones,” he says. “I can’t say exactly why yet, because we haven’t published the results, but it is a very interesting result, and we will try to tell an insightful story based on my modeling.”

As Zhao’s findings are officially released, reviewed, and discussed by the scientific community, he is excited about the practical ramifications of their recent discoveries. “It has a lot of applications because metal is a fundamental material in industry,” he says. “Wherever metal can be used, we can use these novel materials.”

Overcoming the hurdle of cost is the next major step, one his team is already on their way to addressing. “The metallic glass is still much more expensive than conventional metals,” Zhao says. “It’s not currently affordable to use as construction materials. We use it for specialized tools, but our research is working toward the exciting possibility of mass production.”

For Zhao, the idea of frontier research and sustainability seamlessly merges his passion for scientific research with his faith. “Research and education are ways to find God and His glory,” he says, referencing one of his favorite passages, Proverbs 25:2, which reads, “It is the glory of God to conceal a matter; to search out a matter is the glory of kings.”

In his classes at Corban, Zhao plans to find ways to involve his students in his exciting new research, hoping to one day expand Corban’s facilities to the point where even more of his science majors can join him on the forefront of scientific discovery. “This frontier research is quite important in education because it’s dealing with topics of public interest,” he says. “Students will find that this is not just interesting, but the best place to apply their knowledge and learning to be able to contribute.”

As Zhao’s collaborative research begins to circulate among the scientific community, he is also excited by the exposure it will help bring to Corban University. “We are submitting our research to some very competitive journals,” he says. “In the future, as this research is published, this will be good for more people to get to know Corban.”

For Zhao, life as a Christian scientist offers the reward of worship and heightened perspective. “We are actually not just doing research for fun, or money, or funding,” he says. “We are doing science to worship God. As Christians, we do not worship science, but we know that through science we can find the wonder of God’s design in the natural world and see exciting things that reveal the mystery. This is why I am passionate about research. We need to use our talent to serve God in many different ways.”