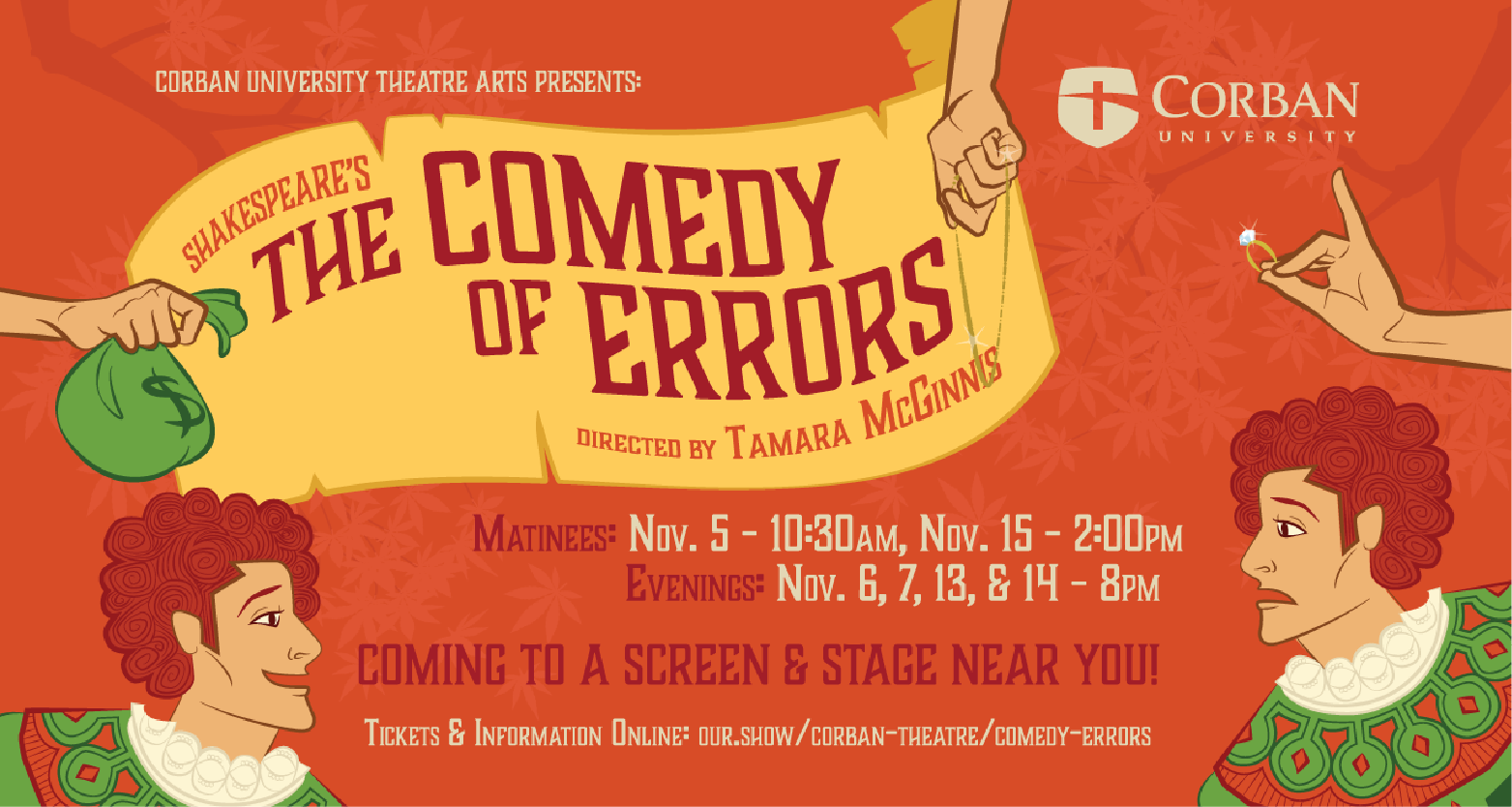 “It’s the definition of creativity to take what you have available and make something out of it,” says Director of Theatre Arts, Tamara McGinnis. “We are doing something completely new, and that is rare.”

Corban’s Theatre Department has been forced to channel uncommon creativity for an unconventional time. Together, McGinnis and her troupe of thespians have thrown the force of their passion for the arts against new challenges, both practical and emotional, which have loomed over their upcoming production. But in spite of the difficulties to overcome, and the new unconventional forms their efforts might take, Corban Theatre is putting on a show.

The challenges of operating in a post-COVID world touch every corner of society, but the arts have been particularly affected. Issues surrounding the risk of spread posed by large indoor gatherings, unmasked individuals, and highly aspiratory activities like singing and acting have locked down live artistic productions worldwide. But even when students were sent home last spring, and it became increasingly apparent that the musical which had been scheduled for the fall would not be a possibility, McGinnis did not lose heart. “It never once occurred to me that we wouldn’t do anything,” she says.

Even though she had been preparing for the fall musical for the past nine months—the scripts had been purchased and the royalty agreement signed and paid for—McGinnis changed direction to keep the far-off hope of the return of the arts alive for both her students and community. “I immediately began looking for things that we could stream,” she says. Shakespeare quickly became a natural choice. Along with her passion for the Bard’s prose, public access rights to all of Shakespeare’s canon made this a natural choice.

But beyond the practicalities, McGinnis saw an opportunity for the message of the play she chose to speak into the shared circumstances of a community plagued by fear, instability, and isolation. McGinnis settled on The Comedy of Errors, a light-hearted, nonsensical comedy with a crucial underlying message.

“It starts with some pretty negative, but farcical situations, and at the end you have a major resolution. A family is reunited, a community comes back together, misunderstandings are resolved, and everything becomes clear,” says McGinnis. “I think this production can help remind us that there will be a time when we can celebrate again, together, without masks, without having to think about being six feet apart.”

With a new play and purpose in mind, the difficult work of figuring out how to safely and practically pull off a production during a pandemic occupied center stage. To even begin, they needed to confront several major challenges. Health and safety were the primary consideration, but beyond that, McGinnis and her team were concerned with how to deliver a quality product that could delight audiences while also allowing performers to showcase their talents.

It became clear early on that masks would not be an option. “For a play, visual cues and facial expressions are really important to convey emotion both to the audience and to the fellow cast members,” says McGinnis. “It’s very difficult to just respond to somebody’s eyes.” Masks also severely muffle speech, making it difficult for fellow actors, let alone audience members, to hear stage performers. McGinnis thinks the solution may be just as creative as the end result.

It was during a staff meeting prior to the start of the school year that McGinnis first laid eyes on her solution. One of Corban’s science faculty had created her own fabric hood which wrapped around and sealed off a face shield, allowing her fellow faculty members to see her face, while also fulfilling the necessary safety functions of a mask.

That week, McGinnis bought fabric, drove it to several seamstresses in town, explained the concept, and a few days later, had 20 functional hoods for her cast and crew. “They do look a bit like beekeepers,” says McGinnis, “but the shields give a huge view of the face, and we can put microphones under the hood. The sound is actually absolutely amazing. It was a phenomenal solution.” This new solution, though not without its problems, allows performers to be seen and heard, interact and react to facial cues, and eliminates the need for remaining 6 feet apart.

Even though these hooded face shields present a crucial solution to a critical problem, they are still far from ideal. Performer Wesley Brewer, who plays Antipholus of Ephesus, admits that he does feel a bit like an astronaut with his hood on, and they provide challenges he’s never had to face before. “The hoods can get hot and a bit hard to breathe inside of them,” he says, “but we wear them anyway because we love doing theater.”

McGinnis sees the hoods as a symbol of her students’ resiliency and dedication to their craft. “It’s a pain, but we are finding a way, and I think there is something to be said for that,” she says. “I hope that as people watch these shows, they will see this hood, not as an impediment, but instead as extended creativity.”

Commitment to the details, whether waiting in the wings, on the stage, or off, has kept the play moving forward. “We stick to the pandemic guidelines and help keep each other accountable, and it has paid off,” says Victoria Venard, who plays Dromio of Syracuse. “No one in the cast or crew has been quarantined, and we are committed to doing what it takes to make sure no one has to miss a day on stage. We wear masks and maintain distance. We have assigned seats for when we are not on stage. We are all taking vitamin C and D, and we get our temperature taken as soon as we enter the Psalm Center.”

The second hurdle to overcome concerned how to make their production available, with the possibility of in-person audiences of any size still in doubt. McGinnis knew they would need to find a way to record the production so that it would be able to stream to external audiences. “We’re not creating a movie, but we are creating a film version of a stage play, and that is something that is beyond my experience and knowledge base,” she says.

Thankfully for the Corban Theatre Department, her husband happens to be a professional videographer. “He has all the equipment. He is doing all the editing. He’s very familiar with the play, and if he has a question he can just ask me,” she says. “It’s a very good arrangement.”

Even with her husband’s expertise and guidance, the burden of learning to perform for an entirely new medium presented a litany of challenges. Chief among them has been the additional time it takes to set up for recording. Finalizing camera angles, setting up lighting, getting into full costume and make-up, shooting, and reshooting, have virtually tripled the amount of time it takes to complete an effective rehearsal. “We’ve had to put aside Friday nights, Saturdays, Sunday afternoons. We’ve been doing five- to eight-hour sessions in a row on top of the regular rehearsals,” says McGinnis.

Even though she has created a highly flexible schedule to help her actors, the sacrifice has been profoundly felt by everyone. “I work 20 hours a week, and am taking 18 credits,” says Venard. “If I’m not memorizing lines, I’m memorizing muscles in the body, or studying theology. It’s exhausting, but I admire everyone working at such a breakneck pace to make the show as incredible as it is.”

Through their commitment and positivity, the cast and crew are already beginning to experience the benefits of this new medium. McGinnis believes it has provided rare and invaluable educational opportunities for her students through their exposure to this process, and also allows for people who do not live nearby—friends, family, and alumni—to still engage with their performance. “In some senses, we are opening up a completely new marketing area because a person doesn’t have to be close to Salem to see our play,” says McGinnis. “A lot of our alumni who support us financially, but have not been able to come because they live far away, can now benefit in ways that they couldn’t have before.”

For the cast and crew, the desire to once again create art that can minister to their community has been the unifying force behind this production. “We work hard. Our masks fog up. We get hungry and tired. Sweat soaks our costumes as we react for the hundredth time,” says Venard, “but we do it because we love acting and we want to give people the chance to laugh. For a couple hours they can forget the pandemic and experience the time traveling wonder of theater.”

“One of the most exciting parts of this process is seeing such a relevant theme being played out through the script,” says Elisa Wright, who plays Dromio of Ephesus. It’s a sentiment McGinnis shares. “Now more than any other time, when everybody is feeling very depleted in spirit, what an opportunity for us to offer this gift of joy, positive escape, a moment to be lifted above our circumstances,” she says. “To remind us that there is a plan, order will be restored, and chaos will not rule forever.”

Corban Theatre’s production of The Comedy of Errors will be showing live for limited in-person audiences beginning November 5, and is also available to stream in the convenience of your home. For more information and to purchase tickets, visit https://www.onthestage.com/show/corban-university/the-comedy-of-errors.