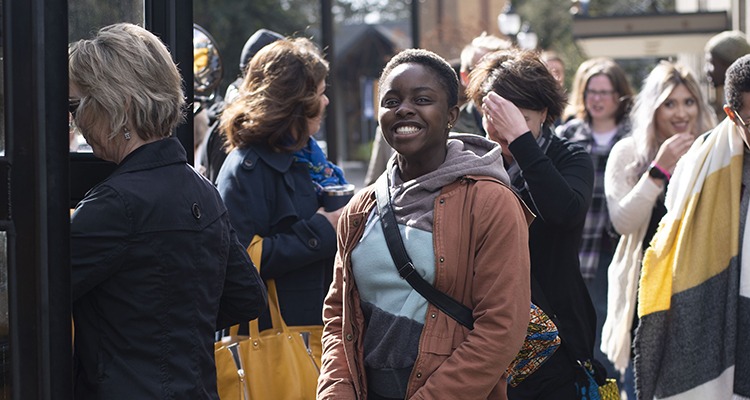 “Who is my neighbor?”

On Thursday, February 20, the Salem Leadership Foundation (SLF) and Corban University teamed up to explore this question in a unique way. About 40 students, staff, and faculty members boarded a school bus and headed off-campus to tour the local community of Salem and see their city in a new light.

“I have lived in Salem most of my life,” said Kara Sappington, Associate Director of CLI Curriculum & Student Support, “but I wanted to go into the tour with an open mind and hopefully allow God to help me see my community and myself in a new way.”

As the bus rolled out of Corban’s entrance, guests were asked by SLF tour guide Imani Hall to observe Corban’s proximity to three state prisons—not as an incidental fact or a cause for concern, but as a challenge to see and respond to the needs of our neighbors. Imani asked, “To what degree is there a relationship or partnership” between Corban and these institutions?

For SLF, the idea of becoming more aware of institutions in close proximity to us is fundamental to building a healthy community. Are schools aware of the churches nearby and the resources and services they offer? Are churches aware of what local nonprofits are doing, and how they can help? Are nonprofits communicating with one another to promote synergy and efficiency as they tackle issues such as homelessness and affordable housing?

In many cases, the answer is, “Not enough.”

Salem Leadership Foundation is passionate about building bridges among faith-based and other service organizations, so broken people can heal and communities can thrive. Their mission is “to engage people of faith and goodwill to transform the community neighborhood by neighborhood.” This process begins by understanding our neighbors—who they are, where they come from, and what their needs are now.

As the bus rolled down State Street past the Oregon State Penitentiary, Imani shared how the justice system has been changing over the past decade, moving beyond simply holding people accountable for their actions, toward reconciling them with their community and helping them heal. For example, many prisons are changing the language they use in an effort to better humanize the justice system. The term “inmate,” which attaches a negative identity to an individual, is increasingly being replaced by the term “adult in custody.” Your identity as a human being created in the image of God comes first; the fact that you made a mistake and are being held accountable comes second.

Throughout the tour, discussions would arise among participants. Why do some people call the neighborhoods north of State Street “Felony Flats,” and how does that nomenclature affect people’s perceptions of that area? What’s the difference between revitalizing a neighborhood and gentrifying it, and where does tension arise?

One bus tour participant, Corban Athletic Director Twiggs Reed, said, “My wife Michelle and I were very impressed with the tour.  The knowledge of the presenters and the way they gracefully addressed some of the past racial and social injustice of our community was eye-opening. There was no finger-pointing or blame, just addressing the reality of the city and how the body of Christ in Salem has worked towards caring for and being champions for the under-served and oftentimes marginalized groups in our society.”

Part way into the tour, the group was joined by Sam Skillern, Executive Director of SLF, who shed light on Salem’s history when it comes to racial discrimination, as well as ongoing efforts toward revitalizing its many communities and neighborhoods. Along the way, he pointed out several significant landmarks in Salem—some marked, some unmarked—and shared the history of each.

He had the bus pull over for a few minutes alongside an unassuming two-story white house in North Salem. He explained that growing up, a friend of his had lived in that white house for a short time. One night, a car drove past and fired 10 bullets through the windows. The reason? The family was African American. Shortly thereafter, the family moved to another part of Salem.

“We do not have a very good history when it comes to welcoming people who are not Anglo,” said Sam.

While some could argue the drive-by shooting back in 1968 was an anomaly—“Salem’s not like that!” many would say—Oregon’s own history speaks otherwise. In 1844, the provisional government of the Oregon territory voted to exclude black people from moving to the state. Similar laws were ratified in following years, and remained in place until 1926, when they were appealed. Bus tour participants were reminded that both individual people and larger systems have played a role in shaping Oregon’s history when it comes to diversity and race.

Understanding the past may be uncomfortable at times, but it’s a crucial step in knowing how to move forward, Sam explained. Much of the tour focused on what can happen when people—and institutions—begin to pay attention to the needs of their neighbors.

Several times, the bus would stop just outside a tiny church, tucked away in the Edgewater District of West Salem, or in Capital Park (the more accurate and healthy way to refer to “Felony Flats”). Each time, Sam would share a story about how that church of 80–100 people had asked that same question—“Who is my neighbor?”—and begun to make a change.

One pastor was called home after attending seminary, and the elders asked him to focus on growing the church so they could move out of their rough neighborhood into a nicer part of town. But the pastor refused. He hadn’t come home to move the church—he’d come home to be the church. He began opening the church building to youth in the surrounding neighborhoods as a safe place to hang out and have fun. The first night, a gang fight broke out on the church’s front porch. But this was only a confirmation that they were right where God had called them.

Over time, as the neighborhood continued to struggle, graffiti would appear on everyone else’s fences and homes—but it never touched the church. Sam remembered the pastor saying, “The gang members knew the church was taking care of their little brothers and sisters. So they didn’t dare touch us. They respected us.”

Today, the neighborhood isn’t perfect (none are, of course), but the church remains a light and revitalizing force, and they’ve since constructed a gymnasium to expand their youth outreach.

Time and again, the bus would stop and Sam would say, here, change began to happen. Out of one small church in West Salem, Salem Free Clinics was birthed, which provides 6,000 medical, dental, and counseling appointments to under-served community members each year. Other churches have succeeded in serving tangible needs in their neighborhood, reducing gang activity, and—of course—bringing new people to church.

When asking ourselves, “Who is my neighbor?”, we must not only consider individuals, but communities. Do we leave a struggling neighborhood so we’ll feel safer, or do we try to change it from the inside out? Do we drive past prisons in fear or indifference, or do we see them as opportunities for reconciliation and rehabilitation?

Kara said, “One area I felt challenged was when Sam Skillern talked about how ‘people are important but so are places,’ which made me reflect both on the location of Corban but also where I live. How do I immerse myself and really understand the people and area I live in? What am I doing to invest in a better future for those people and places? It is easy to stay busy in my own circles rather than connect with the greater community or those who might have different life paths than me.”

God cares about places. And the Bible indicates that He also cares about urban places. “Where does the Bible begin?” Imani prompted. “In a garden. And where does it end? In a city.”

The UN estimates that in 2007, for the first time in the history of mankind, more people lived in urban areas than rural. Engaging our city has never been more important—and it starts by working together to understand how the past has affected the present, and how we can work together for the health and peace—or, to say it another way, the shalom—of the city.