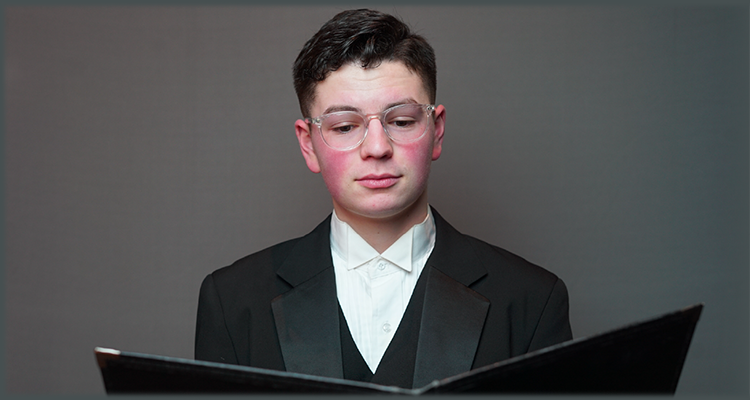 “We need music. There’s a certain aspect of being human that nothing else reflects as well as music,” says Associate Professor of Music Mark Stanek. Since the advent of the COVID-19 pandemic, music—live performances especially—has been something we’ve been forced to forgo. We’ve each felt the impact of this loss in our own ways, big or small, subconsciously or tangibly.

It is a loss that has spread like a hollow echo across the Corban music community. “It has impacted me, our other teachers in the program, and our students tremendously,” says Stanek. “A huge part of our existence is making music together and listening to each other perform.”

Universities across the country were largely forced to abandon musical performances of any kind, placing entire programs and ensembles on hiatus as early uncertainty about the effects of the virus clouded their future. The highly-aspiratory nature of singing and playing instruments, coupled with the concern over indoor rehearsals and public concerts as potential high-risk events for spreading illness, placed the music world in immediate jeopardy. Corban was not immune.

With ensembles and choirs unable to rehearse or perform this school year, the loss of practical music on campus and in the community has been difficult to come to terms with. “We are often ambassadors for the University in a way that other programs can’t really be,” says Stanek. “We’re able to connect with the community in a special way—bringing Christmas concerts to the community, filling the Psalm Center, or going out into the community to do our Hymn Fest. I think it’s a burden on our students to not be able to have that ministry of bringing music to the community.”

It’s a loss that Stanek and the Corban Music Department are actively seeking to remedy. Since the beginning of the pandemic, Stanek has been reading and researching the most recent studies on music and aerosol dispersion, working alongside Corban’s COVID task force to minimize health risks while exploring creative options to keep music alive.

“The administration has been very supportive and reassuring,” Stanek says. “I’ve been told by several administrators that they can’t imagine a Corban without music.” It’s a sentiment shared by the community as many have voiced their concerns over the lack of beloved music programs like the annual Hymn Fest, a time when the community can join together, led by Corban musicians, in congregational music making focused on the singing of hymns.

“I think there’s been a misunderstanding in the community that Corban’s music program was going away or being phased out,” Stanek says. Many were concerned after hearing of the freeze on performances and the elimination of the music performance major. But Stanek offers reassurance and clarity. “The music performance degree almost doesn’t differ at all from our general music degree,” he says. “So, it’s not even that the music performance option has been eliminated, but more that it has been moved under the umbrella of general music. It helps to streamline things a little more without really limiting the options for people who do want to focus on performance.”

The music program is alive and well at Corban, and Stanek is working to find creative ways for students to be able to rehearse and perform once again within COVID guidelines. “I think we’re all mourning the loss of music,” he says. “That’s why I’m so desperate to get ensembles started next semester, even if it’s not in an ideal format. The feeling of making music together and that comradery is really important and we as musicians don’t feel complete when we’re not able to participate in that. There’s something about the physical sensation of sound, things vibrating, harmonies fitting together, you really miss it.”

Thanks to the hard work of Stanek and his department, the students, and Corban’s COVID Task Force, music ensembles have the green light to begin again next semester. Though it will likely be in a very cautious and limited capacity, the news is as life giving to Corban’s musicians as the music they make is to the community.

Choirs will begin rehearsing masked, spread out across the ample space of the Psalm Center, distanced further than six feet per the advice gleaned from Stanek’s research and Corban’s Task Force. Concert Band will begin in a similar capacity, though broken into small rehearsal groups of around ten. Bell coverings (think masks for instruments) have also been ordered as a creative solution to limit the aerosol dispersion of brass and woodwind instruments. Stanek has also been working with the Campus Care staff to determine the rate of recirculation of air in the Psalm Center to help identify the optimum time for rehearsals and help minimize risk to students. For orchestra, the solutions are far simpler. “In string orchestra, we don’t do anything gross like spit,” Stanek laughs, “so we can sit six feet apart with masks on and be just fine.”

Stanek recently had a meeting with his senior music majors to discuss continuing the cherished tradition of Hymn Fest. “Everyone is eager to continue that tradition,” he says, “even in the age of COVID. We don’t know when there will be a full return to congregational singing, but singing together in unity is such a powerful way of worshipping, and losing that has been difficult.”

While the idea of congregational singing in a large group is not yet feasible, Corban’s music department is channeling its creativity to make something happen. The performance will likely take more of a concert-like format, realistically happening far later in the year to account for missed rehearsal time. “It’s certainly going to look different and will likely be some sort of live-streamed event,” Stanek says, “but we’re committed to making it happen.”

Even if Corban concerts have to be exclusively live-streamed, Stanek is committed to the eventual return of live music. “Worshipping on your sofa is just as valuable to God, ” he says, “but I think for us the idea of singing together as an act of worship is more beneficial. I think, through the pandemic, we are being taught a lot about the value of worshipping together. We are realizing it’s something we have taken for granted, and I think we are all looking forward to getting it back.”

Stanek hopes this stark reminder of the importance of music, despite its extended absence, will help reshape our collective approach to the arts moving forward. His advice for when music does return is simple: “Support the arts. Go to concerts. Get out there and enjoy the gifts of these incredible performers, and don’t tell your kids not to major in music. If they love music and have a talent for it, let them go where God is leading them, and there will be opportunities, because there will always be a demand for music. And I believe it will be an important part of the healing process when we do come out of this.”

And while we heal, gradually at first, still mourning the loss of the daily normal of which music was such a vital part for many, we can be grateful that creativity exists, even in adversity—the creativity to find new ways to overcome and to come together. To create both in spite of and because of shared trials. To be reminded of something beyond our present circumstances. Something which outlasts any season. Something eternal. We need music.