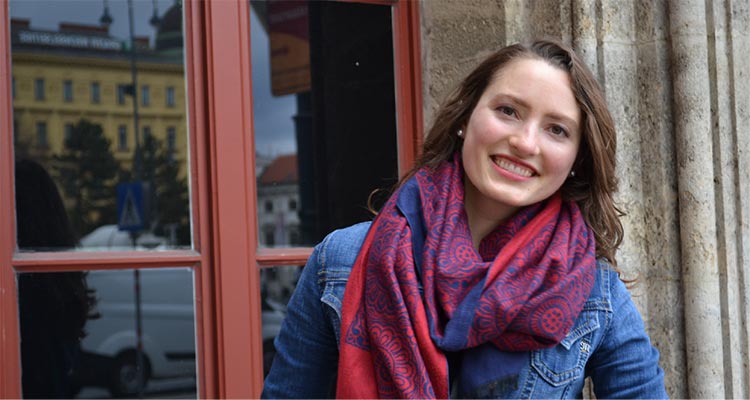 *Due to the nature of the work this featured alum is doing in sensitive global areas, we have removed her last name from this article.

Bethany (’16) has always been a go-getter. As a child, when other kids were advocating for extended bedtimes and the elimination of broccoli, she was entering essay competitions, advocating for the rights of an unborn child. It was an early signpost of a calling that would resurface in her adult years, leading Bethany on a continually unfolding journey as a global pro-life advocate.

Despite her early enthusiasm, Bethany remembers feeling less confident about her pro-life stance later in life. “It was something that I was afraid to publicly take a stand on initially,” she says. “Especially if it was something that could cost me my reputation, an award, or scholarship. I was more concerned about my resume than what was right.”

It was during her time as a student at Corban University, while studying political science, that she was reminded of her passion for pro-life politics. Her first year at Corban, she started a campus apologetics club called Answers and Action, adding on a debate club the following year, all while taking up the leadership of Corban’s Students for Life club.

A double-major in business and political science, Bethany had dreams of using her education, along with her already impressive extracurricular resume, to launch her toward her dream of becoming successful and influential in her community through business, politics, or a combination of the two. But as she sat in chapel her junior year, praying about what God might be calling her to in her future, she was reminded of another prompting. “God showed me, ‘You’ve been doing all of this stuff for your resume, and not for My glory,’” she remembers. “It became a question of whether or not I would actually surrender my plan for His.”

In her classes, her conversations with friends, chapel discussions, and club activities, Bethany had felt continually called toward pro-life ministry. She knew it meant abandoning her specific dreams for her future and accepting the idea of a missionary salary for the long-term. “I was starting to see this as really one of the greatest human rights crises of our time and that I had to do something about it,” she says. In her seat in the Psalm Center, she committed to God’s new calling on her life.

As she stepped down from some of her other places of leadership on campus that she had hoped would help launch her toward the future she had initially envisioned, new opportunities began to materialize.  She secured an unexpected summer internship with Oregon Right to Life and was selected as one of two north American students out of thousands of applicants to attend a three-week leadership learning journey in China. “That’s where I saw abortion facilities on the side of the road, how much it was a part of their culture, and how there was no hope for girls in pregnancy crisis,” she says. “That’s when I saw this need internationally and realized I can’t just do this in America. I have to do something worldwide.”

Her first opportunity came while studying abroad in Germany through one of Corban’s international exchange opportunities. While there, she began volunteering with an Austrian pro-life organization called Youth for Life. Surprised by their current lack of outreach focus to girls in pregnancy crisis at Austrian and German universities, she used her remaining weeks to begin the dialogue with her friends in the organization about what could be done differently.

After returning to the States, and with graduation quickly approaching, Bethany still felt unsure about her future, though God’s calling on her life remained. “I saw the need in Germany,” she said. “But I didn’t speak German. I didn’t have much experience. I thought, ‘Why me?’”

Unconvinced of her capacity to make a difference in Europe, Bethany began applying for jobs in the States. She was offered one of her previous dream jobs, working for Students for Life of America as their Rocky Mountain Regional Coordinator. It was in this position that she began to gather crucial experience, working with school groups across New Mexico, Colorado, and Wyoming. It was exactly what she had hoped for, but the call to serve internationally still remained.

In the spring of 2018, on the cusp of moving into a new role with Students for Life in Texas, Bethany once again looked to God for confirmation of whether or not she should stay in America, near her friends and family and a job she adored, or pursue the uncertainties of ministry abroad. She opened her Bible to Psalm 45. She fixated on verses 10 and 11:

Consider and incline your ear;

Forget your own people also, and your father’s house;

So the King will greatly desire your beauty;

Because He is your Lord, worship Him.

“That was clear enough for me,” she remembers. She called her friends in Austria, and within three weeks she was invited to help start a pro-life organization that would aim to reach students in German-speaking countries. That summer, she moved to Austria and became Director of European Development at ProLife Europe, after it was founded in 2019.

With the daunting task of starting a brand-new organization in a new country, Bethany leaned into the experiences and skills she gathered in her time at Corban. “Corban provides so many opportunities for internships, mentorships, extra curriculars, and clubs that provided me the beneficial skills that gave me the perfect lead into the workforce and to make a difference in the world,” she says. “In the classes I took, from studying political entrepreneurship, Bible, and accounting, it was so helpful in knowing how to start up and run a new organization.”

Since it began in the spring of 2019, ProLife Europe now operates over 37 student groups in 10 different countries. The organization focuses on forming groups of young people throughout Europe, coaching and equipping them to defend life based on philosophical, biological, and ethical principles. “I can’t be there for every person,” Bethany says. “But if I can train other people, we can create community change. We focus on training high school and university students and young professionals, teaching them how to help someone in pregnancy crisis.”

As their ministry expands, Bethany and her team have experienced unique opportunities to share the gospel not only with girls in pregnancy crisis, but with student leaders from different faith backgrounds who share a common desire to protect the rights of the unborn. It is clear that, for Bethany, the ministry starts with empowering the next generation of leaders. “They’re the ones being told by their friends about unwanted pregnancies,” she says. “They are the ones who talk to them, find them a place to stay, or bridge the gap with family, help pay for food and medical bills. They are the ones who know these girls, who are from the same culture, the same language, and they can be there for these girls.”

But with the growing success of ProLife Europe, Bethany sees the opportunity for another chapter, one that rejoins her with the continent that first inspired her calling. “This spring, after praying a lot about what God has for me, I sensed that it was time to go,” she says. “I’ve come for my purpose, and now I need to pass things off and leave. I knew that God had been placing on my heart those days in China, and that international pro-life call.”

With her team and organization set up and thriving, Bethany has begun scouting trips to Africa and Asia, looking to establish a new movement in a region that has very few voices. “Getting to go to China and study abroad in Germany, that’s where my eyes were opened,” she remembers. “Now we are planning to start a new initiative to raise up pro-life student leaders across Africa and Asia.”

Through her early work in Africa, the pro-life groups there have already saved 22 babies in the last six months. But for now, Bethany is looking to begin officially in Sri Lanka, a country which has no current official pro-life movement and experiences more abortions each year than births. “The challenges are very different in each region, but one universal challenge is the number of highly-funded organizations pushing an abortion agenda in Africa and Asia,” she says.

A significant challenge will be confronting the culture of shame that persists around unplanned pregnancy. For Bethany, this is something that transcends geographical boundaries. “Even here in America, we have a culture where you don’t talk about unplanned pregnancy,” she says. “It’s accompanied by judgment and shame in Africa, Asia, America, and Europe. And especially among Christians. These girls are afraid of what the future will hold. Will they be able to stay in school, or in their household, or graduate university?”

As she assembles her team in a place where very few partner organizations exist, Bethany and her small team are connecting with local churches and universities, hoping to set up support groups. “This is a huge opportunity for our young people we are training up to practically help and support these girls,” she says. “And when they are asked, ‘Why do you love me so much?’ they get to say that it’s because of Jesus. That’s the beauty of the gospel.”

Once again, Bethany finds herself looking into uncertainty. But with each new step, she has learned to trade her own agenda, her desire to appear polished, or influential, or agreeable, with an overwhelming drive to glorify God by doing his will. “Jesus called us to see the person beaten and bruised on the side of the road and help them,” she says. “The preborn are the people in society that very few want to look at. It’s not popular to look at them, it’s not cool, it’s not pretty. But they need to be helped.”