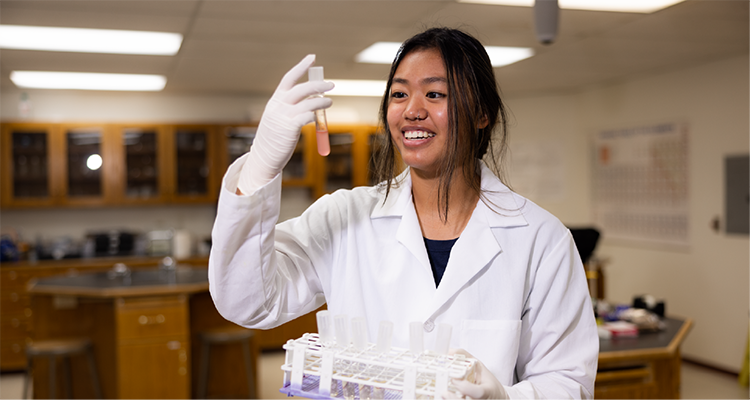 Asia Sage Jackson is a 3.9 student, biology major, history and chemistry minor, member of two research consortiums, and with her spare time, she competes for Corban’s women’s soccer team, where she was named to the academic all-conference team for the 2021 season. During her summer break, she relaxed by competing with Guam’s national team during the AFC Asia Cup qualifying held in the Kyrgyz Republic. Jackson was born on Guam before eventually moving to Idaho.

Her friends often wonder how she fits it all in. “It’s a lot of early mornings and late nights, but I kind of love the grind,” she says. To top her growing list of accolades and activities, Jackson has just been selected as a Murdock Research Scholar, a prestigious award that affords her the opportunity to choose from a pool of 28 different research labs at OHSU’s Knight Cardiovascular Institute and Knight Cancer Institute to further her research goals and experience.

It was during her time playing soccer in Kyrgyzstan that Jackson first heard about the Murdock opportunity through Corban Associate Professor of Science, Dr. Christina Cooper. The deadline was tight, but that didn’t stop Jackson. “We were 13 hours ahead in Kyrgyzstan, so I was filling out the application as quickly as I could after our game,” she says.

It was months later, during a final exam for Dr. Cooper’s Virology and Immunology class, that Jackson received the news that she had been selected for the award. “I was extremely nervous for this exam,” she recalls. “I had studied so hard for it but was so overwhelmed.” Directly after the exam, as Jackson waited with a throng of anxious students for her final grade in Dr. Cooper’s class, she received the email alert. “I genuinely didn’t think I would get the internship opportunity,” she remembers. “It was a great pick-me-up after the stress of that exam.”

Her selection came as no surprise to Dr. Cooper. Jackson has been her research and lab assistant since spring of 2021, honing her lab skills while balancing her many other commitments. “Asia has garnered the experience and skills needed to make her more than capable of pursuing her career goal as a researcher,” Cooper says. “Since she already has such a strong research background, we felt she was the perfect candidate for being a research fellow with the Murdock Trust. I’m not surprised that the Murdock Trust agreed.”

In a few months, Jackson will become the first Corban student to represent the University as a Murdock Research Scholar. Over the past weeks, she has been able to interview some of the top research labs in her areas of interest, winnowing them down to three that focus primarily on cardiovascular cancer research. “I’m interested in environmental toxicology, and especially in researching how external factors influence DNA damage and repair,” says Jackson.

The opportunity is rare, especially for an undergraduate, and Jackson aims to tackle it with the same relentless energy with which she approaches her multitude of activities—“embracing the grind,” as she likes to refer to it.

For Jackson, the grind is fueled by coffee and Corban’s close-knit community. “Soccer, especially at Corban, has taught me so much,” she says. “I do get burned out like most people do, but soccer has taught me to embrace the hard work and love what I do.”

When not on the field or in the lab, Jackson can be found at a local coffee shop, where she tries her best to percolate her passion for biology by conjuring the glamorized ideal of the espresso-fueled academic. “I try to almost romanticize even the little things and let those small moments keep me going forward,” she says.

As for community, that was the aspect that first attracted her to Corban. “I was looking for that intimate and personalized community,” she says. “The week I visited Corban, I had gone to two other schools in the same conference we play in, but when I visited Corban, I knew I was going to come here.”

In turn, Corban’s intimate setting and personalized academic focus have led to more unique opportunities than Jackson would have imagined, including her current opportunity as a Murdock Research Scholar. “I have been given more present opportunities to immerse myself because Corban is a smaller school,” she says. “I am able to work alongside my professors more often, because they do want us to succeed, and they know us individually.”

Even as an underclassman, Jackson has had opportunities to do meaningful research as a member of two research groups and has presented her findings at conferences. As a junior, along with her Murdock Research position, she also has plans to engage in diagnostic testing for COVID and eventual cancer research at Corban’s new Scope Lab, set up in partnership with Santiam Hospital. “Because of the one-on-one time I get with professors, I’ve been able to do so many things and engage in hands-on research that not a lot of undergraduate students at other bigger universities are able to do, and that’s all because of Corban,” she says.

Corban’s unique faith-focus has also played a profound role in Jackson’s professional and personal development. “Being able to integrate science with a faith-based curriculum is great because at a lot of other schools you don’t get that opportunity,” she says. “I’m able to learn that the two can coexist and each can further our understanding of the other.”

As a junior, Jackson is already able to build on that understanding, engaging in research that is immediately impactful to her professional plans. “I hope to gain a better understanding of things like the influence of our gut microbiome on our health,” she says. “It’s a new field and researchers are finding that the gut microbiome even influences our behavior and mental health.”

At OHSU, Jackson will have the opportunity to engage with expert researchers at one of the nation’s preeminent medical research institutes, studying how bacteria can be applicable to therapeutical treatments and cancer treatments. “I like bacteria a lot,” she laughs. “It’s already proven that bacteria are very helpful for therapy and general wellness.”

While her friends may not always understand her drive and sometimes question her sanity, Jackson is eager to approach each new opportunity with a competitive mindset. “I like to keep challenging myself, and I guess that comes from the soccer world,” she says. “I’m excited to learn new things and involve myself in everything I can that will help me be the best version of myself that I can be.”