A Legacy of Christian Education: Pat Mennenga Named “Distinguished Alumni of the Year” 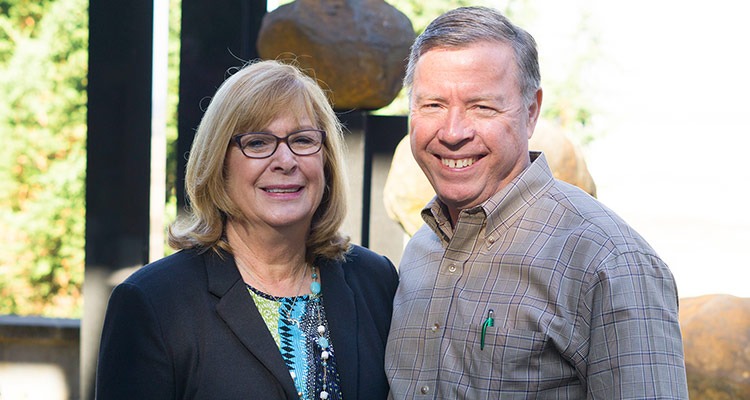 Pat Mennenga (’71) was selected as Corban’s Distinguished Alumnus of the Year for 2018-19. This award is presented to someone who graduated from Corban ten or more years ago, and who exemplifies Christian character and a life in service to Christ and others. David K. Holtzhouse, ACSI Regional Director for the Florida/Caribbean Region, says, “Pat is widely considered the accreditation expert in our office and throughout the Region. Even though Pat carries a tremendous load of responsibility, he is always willing to do anything asked of him. . . . Pat is trusted, respected, admired, and serves as a mentor for many throughout our region. . . . Pat is a faithful, godly example of what can happen with a life that is fully surrendered to the Spirit of the Lord.”

“If you’re going to build an education, why not build it on truth?”

Pat and Rea had known they wanted to spend their careers in Christian education long before they graduated from Corban University (then Western Baptist College) in 1971 and 72. Pat saw tremendous value in an education that would complement the Christian truths being taught in the home and the church. “Can you make it in a public school? Obviously, you can!” he says. But cultivating a Christian worldview in young people through academic education has been Pat and Rea’s life calling.

During their time at Corban, Pat and Rea learned of an opportunity to teach in Florida. Intrigued by the prevalence of Christian education in that area, Pat, Rea, and a couple of friends all moved to Florida to teach in Christian schools.

“We all said, ‘We’ll go for one year,’” Rea laughs, explaining that they wanted to learn as much as they could about Christian education and then bring their knowledge back to the West Coast. “We just never made it back here.”

Together, Pat and Rea taught secondary social studies at several Christian schools, and Pat eventually moved into the administrative side of education. He and Rea had both been working at Pine Hills Christian Academy, a church-run school in Orlando, for about a decade when Pat began to sense God calling him in a new direction.

According to his wife Rea, the idea to start his own school came to Pat in a flash. “He sat up in the middle of the night, and he said, ‘God just told me I’m supposed to start another Christian school.’” The school Pat envisioned was a board-run community Christian school, with no denominational affiliation but with a steadfast commitment to Christ-centered education.

Pat explains that Christian schools are usually either run by a church or by an independent school board, and that both kinds of schools can have a positive impact in students’ lives. But the longer he had taught at a church school, the more Pat had begun to see the model’s limitations. If a church is education-minded and the pastoral team and elders are supportive of hiring quality educators, the school can flourish. But churches and schools are very different entities, and sometimes their philosophies conflict.

Pat began to dream of starting a community Christian school that was unattached to a local church and was instead governed by a board.

First, Pat held a parent meeting to gauge interest in a board-run school. Then he approached the pastor to ask for his blessing. “I don’t want to be rebellious,” Pat said; “I want to do this right.” He asked permission to start a community Christian school, explaining that it wouldn’t compete with Pine Hills, as it would be on the other side of town.

To Pat’s relief, the pastor understood. “I don’t agree that you should leave,” he said, “but if you know God’s calling you, you’ve got to do that. I’ll give you my blessing from the pulpit.”

Once it had been announced to the church that Pat would be leaving his position as principal, the pressure began to mount to find enough students—and a large enough space—to launch a brand new school by the following fall. “At the end of that school year, we were all going to be unemployed, because we had announced we were starting a community Christian school—but we didn’t know where.”

In addition to the location, Pat agonized over a name for the school. It had to be just right, pointing to the school’s mission and highlighting both its academic focus and Christian foundation. Once again, Rea remembers Pat sitting up in bed in the middle of the night. “I know the name!” she remembers him saying, jolting her awake. “What?” she mumbled. “The Master’s Academy. We have to emphasize the word The.”

In its early days, the school had to make do with what they could afford. They rented two separate buildings and began their first school year with 210 students. One of the first purchases they made was a set of two 66-passenger buses from North Carolina. As Pat drove one of the buses back over the Florida state line, the transmission blew.

But from such a humble beginning, The Master’s Academy has grown into a state-of-the-art 18-month through 12th grade school on a $30 million campus, where young people learn about the gospel of Jesus Christ while being academically equipped. A vibrant arts program, over 15 athletic sports, and even a robotics program help provide a quality, holistic education to students.

The Master’s Academy became a special place to Pat and Rea. Not only had they helped create it, but it had become part of their family heritage. “We have a daughter who teaches there, and we have three grandsons there,” Rea says. One grandson who began his schooling at The Master’s Academy is now a senior in high school.

And yet, although Pat claims The Master’s Academy is where he has left his fingerprint the most, it was just one stepping-stone in a long career in Christian education.

When Pat was first asked to serve as a regional director for the Association of Christian Schools International (ACSI), he initially said no. He couldn’t imagine leaving The Master’s Academy, the school he had built from the ground up. “I don’t know if I can leave my baby,” he remembers thinking.

Pat had become closely connected with ACSI when he’d worked to obtain accreditation for The Master’s Academy, and since then he’d also served on their board. “Their basic mission is to enable Christian educators worldwide,” Pat explains. Although he had turned them down when offered a director’s position, he began feeling nudges from God to serve with ACSI.

“I prayed and prayed and prayed,” Pat said, “And I told Rea, ‘I see God’s hand moving me out of The Master’s Academy. I can only go so far there—I’m a founder, but maybe not a builder.’” The thought of being able to serve Christian educators on a wider scale energized him.

At first, Rea was devastated at the thought of leaving The Master’s Academy. “It was really, really difficult for me,” she says. Not only would she have to give up her teaching position in the school she loved, but they’d have to move to Clearwater, over 100 miles away. But Rea felt God was calling her husband into this new stage, and she was determined to support him. She knew the thought of being able to help not one but hundreds of Christian schools had gotten ahold of Pat’s heart. “How can I argue with that?”

So Pat and Rea began the next leg of their journey, and he accepted a position with ACSI as an Associate Director in the Florida Regional Office. His new role involved accreditation training and processes for pre-K through 12th grade schools in Florida, the Caribbean, and parts of the Southeast. His specialization was in early education, so he spent much of his time conducting preschool inspections.

Pat’s passion for early education is readily apparent. The right kind of early education “lays the best foundation for kids,” he says. For Pat, there’s a world of difference between a daycare and an early education program. “A quality Christian education involves play, discovery, and using the unique individual learning styles of each child. It’s not ‘grill and drill.’”

In 2018, Pat’s role changed to Accreditation Manger for Florida, Alabama, Mississippi, Tennessee, and South Carolina. As he traveled throughout the region, Pat served as much more than a school inspector. He saw himself first as a mentor and coach, coming alongside schools to help them with their school improvement plans—“because accreditation is synonymous with school improvement,” he says. He’s helped schools develop and improve their technology, professional development, curriculum, and health and safety, as well as occasionally assisting with board training.

Although Pat’s primary role involves educating the educators, he still finds time to invest in children directly. For the past 14 years, he and Rea have hosted what they call “Grandpa and Grandma Camp” for their own grandchildren. “They last about 8–9 days, and we have a theme every year,” says Rea. This past year’s theme was “Go make a difference,” and they spent time helping with community service projects. The camps are all about purposeful fun—not unlike the early education programs Pat has helped cultivate over the years. “I think that’s why we’ve always set a theme every year,” says Rea,” so our grandchildren would see a purpose, see a plan, see a vision.”

For Pat and Rea, a quality Christian education happens in the home and in the school. From building a Christian school from scratch to overseeing school improvement across the Southeast to hosting educational camps for his own grandchildren, Pat has spent his life ensuring that the next generation would grow up in the truth of God’s Word and would be educated by people who see children the way God does—uniquely made in His image.